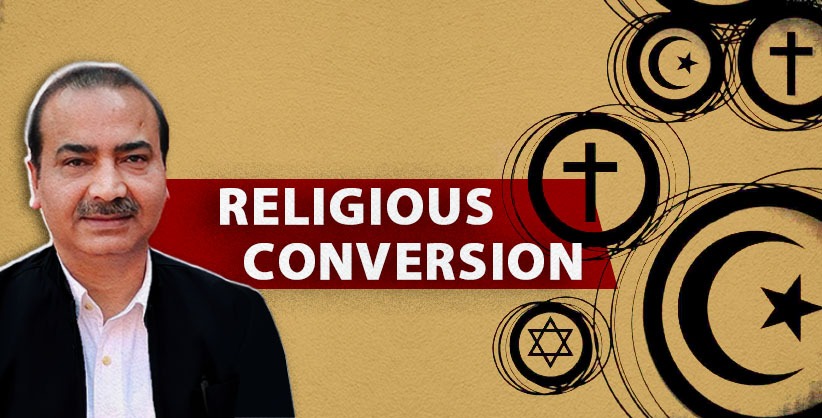 NEW DELHI: Advocate Ashwini Kumar Upadhyay has filed a fresh plea in the Supreme Court for a direction to amend the Indian Penal Code and Criminal Procedure Code in order to check religious conversion carried out through intimidation, threat, deceit, and through gifts and monetary benefits.

In an application in his pending PIL, Upadhyay submitted that before 2020, it was observed Delhi like situation prevailed in Uttar Pradesh and Police was reluctant to file FIR but after Anti-Conversion Law, UP Police is registering religious conversion cases and therefore there is sharp decline in religious conversion.

"Hindus have become minority in many states due to religious conversion by intimidation, threatening, deceivingly luring through gifts, monitory benefits, offering other helps like school admission/medical benefits and using superstition and black magic," fresh plea by Upadhyay said.

Maintaining that Hinduism faced continuous attacks, the petitioner said in their zeal of converting people to their own religion both Muslims and Christians killed billions of people, raped millions of women and destroyed millions of temples and other worship centres.

"They have completely destroyed many ancient cultures like Maya Mesopotamia, Roman, Egypt etc.
In the present world there is not even a single secular country in which Muslims are in majority," he said.

"The division of India took place in 1947 only on the basis of Islamic religion. Both Muslims and Christians always remain involved in increasing strength and population of their religion in order to change demography of the country in which they are residing as in the last when they turn in majority can convert that country into an Islamic or Christian country. Composition of demography is not merely a data but it reflects the culture, philosophy and identity of an area and nation," the plea added.

After independence, there have been increase in population of Christians and Muslims in the country, the petitioner listed out legislative development in control the practice of converting people including tribal population.

Acting on his PIL, on November 14, the top court had asked the Centre to clarify its stand on steps taken to tackle the issue of forced religious conversion, saying it is a "very serious issue", and may affect the security of the nation and as well as freedom of citizens.