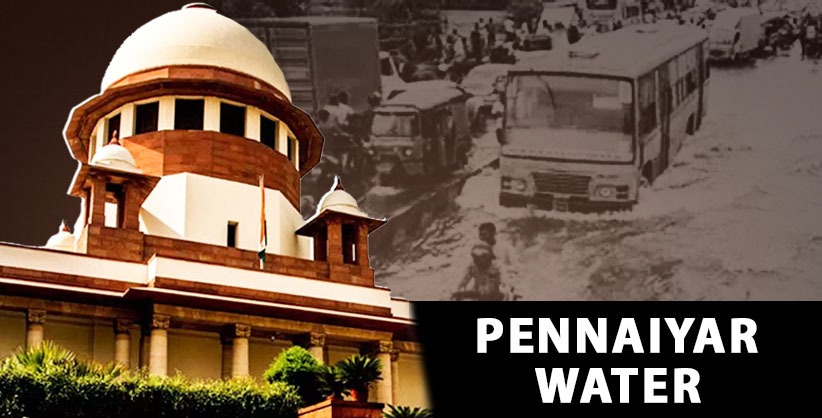 NEW DELHI: The Union government has told the Supreme Court that it has "in principle" decided to set up an Inter State Water Dispute Tribunal under the 1956 law to refer a complaint filed by Tamil Nadu against Karnataka on sharing of Pennaiyar river water.

Additional Solicitor General Aishwarya Bhati and senior advocate S Wasim A Qadri, representing the Centre, submitted before a bench of Justices M R Shah and M M Sundresh that a complaint filed by Tamil Nadu has been referred to the negotiating committee.

The counsel sought four weeks time to clarify the position in the dispute.

The bench allowed the plea by the Centre for time and fixed the matter for hearing on December 14.

Before that, the court, however, asked the Centre why so much delay in resolving the matter.

The complaint was filed by Tamil Nadu with the Centre in the matter on November 30, 2019.

On November 14, 2019, the Supreme Court allowed the Tamil Nadu government to invoke the powers of the Union government in terms of the provisions of the Inter-State Water Disputes Act, 1956 and seek the constitution of a tribunal on the dispute over sharing of water.

On January 20, 2020, the Central government constituted the negotiations committee to resolve the water dispute. The committee held two meetings on February 24, 2020 and on July 07, 2020.

Senior advocate Mohan V Katarki, on behalf of Karnataka submitted that the matter can be resolved through negotiation.

He said the inter-state water dispute tribunal can be formed only if the Union government is satisfied that the matter can't be resolved through negotiation as per mandate of Sec 4(1) of the Inter State River Water Disputes Act of 1956.

He also claimed his State is opposed to the constitution of a tribunal since the complaint of Tamil Nadu does not disclose any dispute even prima facie.

Senior advocate V Krishnamurthy, representing Tamil Nadu submitted the central government has delayed formation of the tribunal even though Section 4(1) of the 1957 mandates for its constitution within one year from the date of complaint.

Tamil Nadu has complained that it is prejudicially affected by unlawful actions of Karnataka in Pennaiyar basin. The complaint particularly questioned constructed across  Markandeya Nadi for storage of 500 mcft of water.  Tamil Nadu has also claimed prescriptive rights and natural flow, besides seeking enforcement of 1892 and 1933 agreements entered into by the princely State of Mysore and Madras presidency.