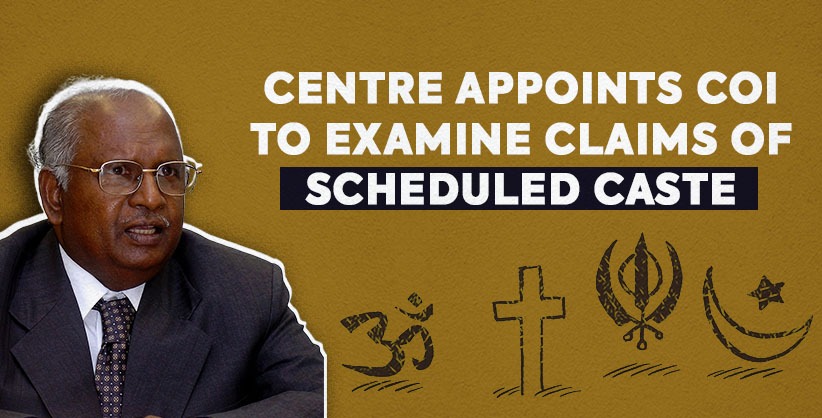 NEW DELHI: The Union government has appointed a Commission of Inquiry under chairmanship of former Chief Justice of India K G Balakrishnan to examine claims of granting status of Scheduled Caste to the people who have converted to other religions.

The Commission, also comprising retired IAS officer Dr Ravinder Kumar Jain, former member, UGC Prof Sushma Yadav as members, would examine the matter of according Scheduled Caste status to new persons, who claim to have belonged to the Scheduled Castes historically, but have converted to religion other than those mentioned in the Presidential Orders issued from time to time under article 341 of the Constitution.

According to a notification issued by the Ministry of Social Justice and Empowerment, the panel would also look into the changes Scheduled Caste persons go through on converting to other religions in terms of their customs, traditions, social and other status discrimination and deprivation, and its implication on the question of giving them Scheduled Caste status.

Besides, the Commission has also been granted liberty to examine any other related questions that it deems appropriate, in consultation with and with the consent of the central government.

The Commission to be head quartered here would submit its report within a period of two years.

Notably, certain groups of persons who have historically suffered social inequality, discrimination and the consequent backwardness, have been declared to be Scheduled Castes by Presidential Orders issued from time to time under article 341 of the Constitution.

The government noted that certain groups have raised the question of revisiting the existing definition of Scheduled Castes by according the status to new persons who belong to other religions beyond those permitted through Presidential Orders, and in contrast, many other groups have also opposed it.

"Certain representatives of the existing Scheduled Castes have objected to such granting of Scheduled Caste status to new persons. This is a seminal and historically complex sociological and constitutional question, and a definite matter of public importance," it said.

Justifying it decision, the Ministry said any change in definition of the Scheduled Castes should be on the basis of a detailed and definitive study and extensive consultation with all stakeholders, given its importance, sensitivity and potential impact.