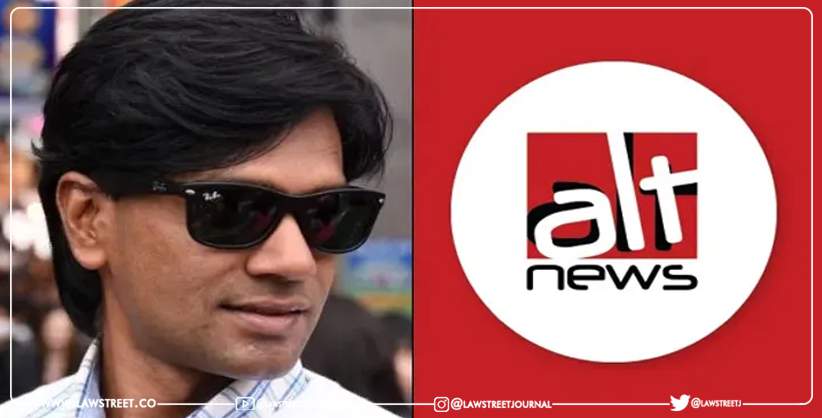 On Monday, a cyber unit of Delhi Police arrested Mohammed Zubair, the co-founder of fact-checking website AltNews, on charges of allegedly hurting religious sentiments following a complaint by a social media user who referred to a tweet from 2018. Police reported that he has been remanded in police custody for a day and will be produced in court for bail hearing after Tuesday.

The police reported filing a First Information Report (FIR) against Zubair in relation to the complaint under IPC,1860 Sections 153-A (promoting enmity between different groups) and 295-A. (malicious acts, intended to outrage religious feelings).

According to police officials, the complainant in this case uses the Twitter name Hanuman Bhakt and has a profile picture of Lord Hanuman. On Monday night, the account had over 400 followers.

Earlier this month, Zubair drew attention to remarks made by former BJP spokeswoman Nupur Sharma about the Prophet, which prompted outrage from a bunch of countries, including those in the Gulf. The anger forced the central government to disassociate itself from Sharma's remarks and the ruling BJP to suspend her and remove another party spokesperson, Naveen Kumar Jindal.

The Opposition, including Congress, TMC, RJD, AIMIM, and the Left parties, condemned Zubair's arrest, accusing the BJP-led NDA government of persecuting those who "expose its hate speech and fake propaganda."

The leader of the Congress, Rahul Gandhi, tweeted,

“Arresting one voice of truth will only give rise to a thousand more.”

Several other opposition leaders voiced "shock" at Zubair's arrest, called it a “violation of due process”, and demanded that Zubair be “released immediately”.

“Delhi Police has registered a case after getting a complaint from a Twitter handle, wherein it was alleged that Mohammed Zubair had tweeted a questionable image with a purpose to deliberately insult the god of a particular religion. Such tweets were getting retweeted and it appeared that there is a brigade of social media entities, who indulge in insult mongering thereby leading to a possible ramification on communal harmony and are overall against the maintenance of public tranquility.”

A senior police officer said that the tweet purportedly showed an image of a hotel, with its board reading ‘Honeymoon hotel’ repainted to ‘Hanuman hotel’. The complainant posted a screenshot, tagged Delhi Police, and wrote:

“Linking our God Hanuman ji with honeymoon is a direct insult of Hindus because he is brahmchari. Kindly take action against this guy @delhipolice.”

The officer said that,

“We came across the tweet last week. Zubair had posted this tweet in 2018 but people have been raising the issue recently. We took action and registered an FIR.”

“Zubair was called today by Special cell, Delhi, for investigation in a 2020 case for which he already had protection against arrest from the High Court. However, today at around 6.45 pm, we were told he has been arrested in some other FIR for which no notice was given which is mandatory under law for the Sections under which he has been arrested. Nor FIR copy is being given to us despite repeated requests.”

The case to which Sinha was referring dates back to September 2020, when police charged Zubair under the POCSO Act for responding to a Twitter user's nasty post. In this case, however, the Delhi High Court had prevented the police from pursuing coercive action against him.

According to police sources, Zubair and his lawyers from Bengaluru arrived at the IFSO office in Dwarka at 2:00 p.m. Sources said that,

“Police started questioning him, and around 3.15 pm, another investigation officer served him a notice under section 41 CrPC (in the present case) and asked him to join the investigation. At around 5.30 pm, he was arrested.”

“After the medical examination, Zubair is being taken to an undisclosed location. Neither Zubair’s lawyers nor I are being told where. We are in the police van with him. No police person is wearing any name tag.”

In a statement DCP Malhotra said that,

“In the month of June 2022, when Delhi Police was alerted by a Twitter handle that Mohammad Zubair had earlier made an objectionable tweet and his followers/ social media entities had amplified and created a series of debates/ hate mongering in the tread, he was examined in this case and his role was found objectionable. He was evasive on the questions and neither provided the necessary technical equipment for the purpose of the investigation nor cooperated in the investigation.”

He stated,“During investigation, the conduct of Mohammed Zubair was found questionable, which warranted his custodial interrogation to unravel the conspiracy in this matter.”

DIGIPUB, an organisation of digital news media organisations, released a statement “strongly condemning the arrest” in response to the police action.