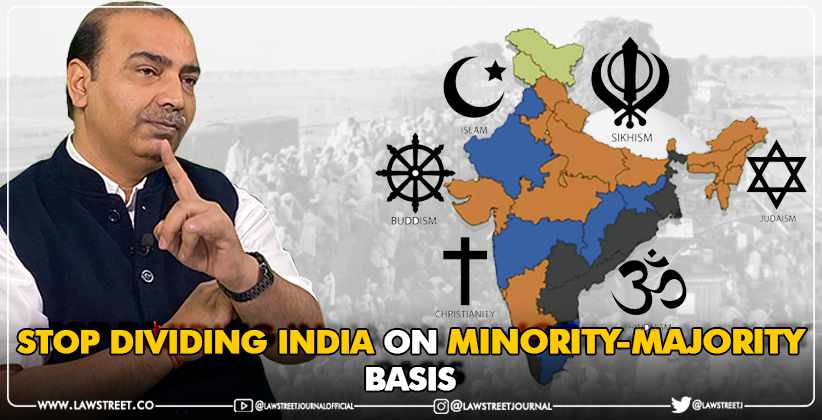 The Preamble proclaims to guarantee every citizen ‘liberty of thought, expression, belief, faith, worship’. Keeping in view the constitutional guarantees for the protection of every citizen's cultural, educational and religious rights, ‘minority’ was not defined in the Constitution.

After the partition, Muslims and Christians living in different parts opted to continue to live in India. Therefore, while giving the final shape to the Constitution, the framers felt it necessary to allay apprehensions and fear in their minds by providing special protection for religious, cultural, and educational rights.

Article 30 inter-alia states that minorities, whether based on religion or language, shall have the right to establish and administer educational institutions, but the question is, to whom is this article applicable? There are around 300 religions in the world and around 30 in India as well. Can every single one of them be considered a religious minority under Articles 29-30? If yes, then why doesn’t the government declare the followers of Bahaism and Judaism as a minority?

The Preamble proclaims to guarantee every citizen ‘liberty of thought, expression, belief, faith, worship’. Articles 25-30 guarantee protection of religious, cultural, and educational rights to majority and minority both. Keeping in view the constitutional guarantees for the protection of every citizen’s cultural, educational and religious rights, ‘minority’ was not defined in the Constitution. And instead of clearly defining ‘minority’ in the background of the constitutional scheme, Section 2(c) of the National Commission of Minorities Act 1992 (NMC Act) and Section 2(f) of the National Commission for Minority Educational Institutions Act 2004 (NCMEI Act) gives power to the Centre to notify any community as ‘minorities’, who might require special protection of religious, cultural and educational rights. The language of Section 2(c) of the NCM Act 1992 and Section 2(f) of the NCMEI Act 2004 is the same. Using unbridled power under the Act, the Centre arbitrarily notified 5 communities as a minority on 23.10.1993.

Articles 14, 15, 19, and 21 are golden corners of the Constitution. Therefore, the Centre cannot arbitrarily grant minority status. Framers never contemplated creating a National Minority Commission and Minority Affair Ministry on religion basis. Articles 25-30 guarantee cultural and religious freedoms to majority and minority both. Moreover, unity and integrity are the goals of our Constitution. Hence, the concept of a religious minority at the national level is very dangerous for unity and national integration. Therefore, the minority-majority concept should be abolished in the spirit of the Supreme Court’s Judgment in the Bal Patil Case. Otherwise, the minority must be identified at the district level.

Article 29 is assumed to relate to minorities, but the scope is not confined. It is available to ‘any section of the citizens residing in the territory of India or any part thereof having a distinct language script or culture’. Hence, include the majority also, as the then Chief Justice of India, Justice Ray, pointed out in Ahmedabad St. Xaviers Case (1974). Internationally, ‘Minority’ is defined as “a group/community which is socially, economically politically non-dominant and numerically very inferior in population, deserves protection from likely deprivation of their religious, cultural and educational rights by majority communities, who are likely to gain political power in a democratic form of government based on election”.

Although the word ‘minorities’ occurs in the marginal note of Article 29, it does not occur in the text. The original proposal of the Advisory Committee in Constituent Assembly recommended thus: “(1) Minorities in every unit shall be protected in respect of their language, script and culture and no laws or regulations may be enacted that may operate oppressively or prejudicially in this respect.” [B. Siva Rao, “Select Documents” (1957) Vol. 2, Page 281]. But after the clause was considered by the Drafting Committee on 1st November 1947, it emerged with a substitute of ‘section of citizens’. [B. Siva Rao, Select Documents (1957) Vol. 3 pages 525-26, clause 23, Draft Constitution]. It was explained that the intention had always been to use ‘minority’ in a wide sense, so as to include (for example) Maharashtrians who settled in Bengal. [7 CAD 923]

In Article 30 (1), crucial words are: (a) minorities (b) establish and administer (c) educational institutions (d) of their own choice, but the word ‘minority’ has not been defined in the Constitution. Motilal Nehru Report (1928) showed a prominent desire to afford protection to minorities but did not define the expression. Sapru Report (1945) also proposed a Minority Commission but did not define minority. [The Year Book on Human Rights (1950), pg. 490].

The UN Sub-Commission on Prevention of Discrimination and Protection of Minorities has defined ‘minority’ (by inclusive definition) thus: (i) The term ‘minority’ includes only those non-document groups in a population which possess and which preserve stable ethnic, religious, linguistic tradition or characteristics different from those of the rest of the population; (ii) such minorities should properly include a number of people sufficient by themselves to preserve such tradition or characteristics; and (iii) such minorities must be loyal to the State, which they are nationals.

Article 27 of the International Covenant on Civil and Political Rights does not define the expression but gives the rights as under: “In those States, in which ethnic, religious or linguistic minorities exist, persons belonging to such minorities shall not be denied the right in community with the other members of their group, to enjoy their own culture, to profess and practice their own religion or to use their own language”. From the above, it is clear that ‘minority’ means a ‘socially economically politically non-dominant’ group, which is very inferior in population. It is a relative term that represents very inferior numbers, sections, or groups. In that sense, there may be a religious minority and linguistic minority, etc.

After the partition, Muslims and Christians living in different parts opted to continue to live in India. Therefore, at the time of giving the final shape to the Constitution, the framers felt it necessary to allay apprehensions and fears in their minds by providing special protection for religious, cultural, and educational rights. At that time, such protection was found necessary. The framers accepted common citizenship regardless of religion, language, culture, faith and engrafted Articles 25-30 to give security to all and not for the appeasement of some.