[Exclusive Interview]: Legal Action That Will Be Taken Against Jamaatis’; LawStreet Journal In Conversation With Former Delhi DCP LN Rao 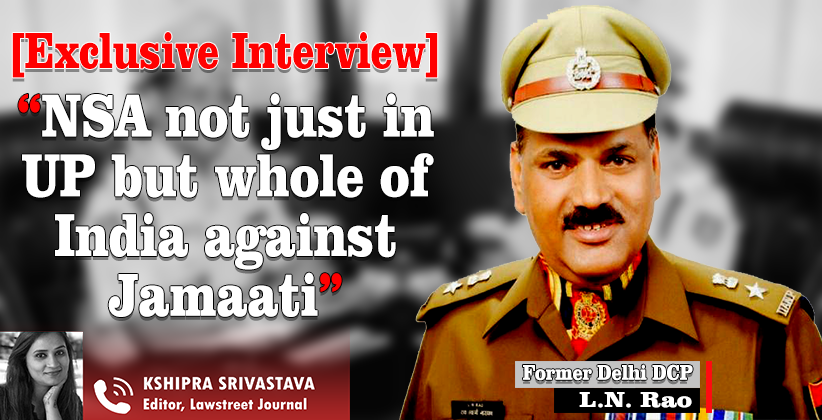 The whole of Tablighi Jamaat has managed to instill fear among people across Asia when it comes to spreading coronavirus. How the Tablighi Jamaat need to be held liable under the laws of India has been discussed in an interview with Former Delhi DCP LN Rao who was interviewed by Law Street Journal Editor Kshipra Srivastava.

Law Street Journal: You have got to know and examine Delhi very closely. Since the past few days, a lot has been happening in Delhi, mainly I am talking about the Tablighi Jamaat incident. Under what crime do you classify this incident ?

LN Rao: See, what the Tablighi Jamaat did is in the category of “heinous crime”. The Delhi government and the police had said that there cannot be a huge amount of gathering taking place. This incident has increased the spread of Corona virus and the rise in the infection.  People from outside the Jamaat should have told that we have come from abroad. They should have done their medical examination done, should have got their inspection done.  Because if there was a likelihood of disease, it would not have spread further had there been any examination of sorts. The states from which these people have come, they had not informed their governments and this constitutes as a crime and thereby they have helped in spreading the infection further more.

Law Street Journal: Sir, regarding the audio of the maulala saheb being leaked, there are several instances of hate speech being brought forth that are being connected to the religion of a person, what do you think about this?

LN Rao: This is absolutely wrong. Corona's disease cannot be perceived by associating it with any religion. This disease does not come from any religion. The speeches spoken are against humanity.  Everyone knows that they have to maintain social distancing and keep themselves at home during this period. Even after several instructions being given, many people have gone against the norms. These people have violated the instructions given by the Prime Minister.  There is absolutely no justification for associating it with any religion. These people are telling the wrong things by stating that everyone has to live in a mosque and further to which no disease can reach you here. Confusion is being created among these people which is totally wrong.

Law Street Journal: The people of Tablighi Jamaat are not cooperating with medical helpers.  The CMO of Ghaziabad also had to write a letter wherein these people came in front of the helpers and started behaving in a vulgar manner in front of the nurses.So would this make them fall under the category of crime?

LN Rao: The people who are giving treatment to others in the epidemic are public servants. That is their job in order to give medical facility to people and to take care of them.If someone obstructs their work, then they can be held under section 186 of the IPC which talks of obstructing the public servants in their work and further to which, sections 332 and 353 will apply to them if they have committed a serious offence and caused harm to the public servant. Others instances like in Ghaziabad wherein these people have committed indecent acts with nurses, then another section is to be filed, that is Section 354 and 509, which are another sections that talk about outraging the modesty of a woman. An FIR is already filed against them and further to which in Uttar Pradesh, NSA has been applied as well.

Law Street Journal: Yogi Adityanath has said that those who are not cooperating with the doctors or police about corona will be prosecuted under the National Security Act. How do you see it?

LN Rao: This is a very good move. This should be applicable in the whole of India, whoever attacks on para medical staff or attacks on police should be held liable. Because of the fact that all of them have come out for helping people by putting their own lives at risk.  We are safe at home because these people are engaged in our service.  And if a person attacks those who serve in this sense, then two things will likely happen. The first thing is that their morale standard will fall, so why would these people serve. Secondly, such people get encouragement that if they do this then nobody can spoil them. So the law should be strict and prevent the ones from causing damage to the police, public servants and government. Unless a law like MSA comes into force, these people will not come under control.  Because as you are seeing people, these infections have increased due to the Tablighi Jamaat and there is a chance of further increase in the spread as well through the people who got infected and through the ones who came into contact with the infected ones. Although the police are investigating into this and helping these people, these people should take the initiative themselves first and get their medical examination done so that the police work gradually  becomes easier.  But for those people who do not understand this, the strictest law should be made against those people.

Law Street Journal: The last question, what kind of legal action will be taken on the Maulana Saad of Tablighi?

LN Rao: See the case that the crime branch has registered is a case registered under a very serious offense.  I understand that the sections under which they have done so are Section 269, 270, 271, and the Act which is a law dealing with the spread of infection have been registered under their cases and if they continue to abscond in this, they will definitely be arrested.  A case will be registered on whatever comes after the inquiry. Crime Branch will soon catch them.

After the interview one can conclude the former Delhi DCP LN Rao also agrees that the people in Tablighi jamaat who instigated the crime need to be held liable and strict measures needs to be taken against anyone who does not follow the norms made in order to ensure security of the public.

Government (of, by, for) the People Have Come Forward To Help Its People

[Breaking]:15 Districts Of UP Including Noida, Gzb To Be Completely Sealed From Midnight Today [Read Notice]