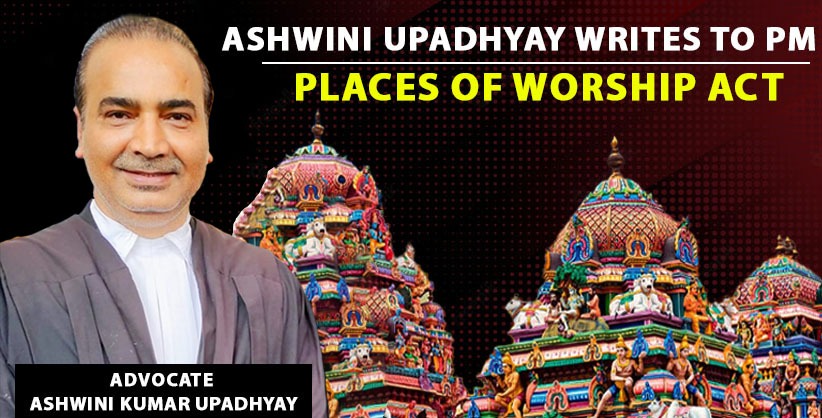 NEW DELHI: Advocate Ashwini Kumar Upadhyay, who has taken up cudgles on behalf of millions of concerned citizens, has asked  Prime Minister Narendra Modi to direct the Law and the Home Ministries to file their replies to his PIL challenging validity of a 1991 law, which legalised the barbaric acts of invaders to capture and change places of worship of other faiths.

He pointed out the Supreme Court had already issued notice to the Union government in the matter on March 12, 2021 but the Ministries concerned have yet not filed their responses. The court had twice granted time to Solicitor General Tushar Mehta on a request made by him.

In his letter to the PM, Upadhyay wrote, "Barbaric invaders destroyed hundreds of places of worship and pilgrimage to make Hindus, Jains, Buddhists, Sikhs realise that they have been conquered and have to follow the dictum of Ruler. Hindus, Jains, Buddhists, Sikhs had suffered from 1192 to 1947. Now, the question is as to whether even after independence; they cannot seek judicial remedy to undo the barbarian acts through the process of court to establish that law is mightier than the sword."

The 1991 Places of Worship (Special Provisions) Act had put a retrospective cut-off date of August 15, 1947 mandating maintaining the character of religious places and barring any court to take up any petition except the Ram Temple at Ayodhya.

Contending that the character of a temples does not change after demolition of roof, walls, pillars, foundation and even offering Namaz, the lawyer said the right to restore back religious property is unfettered as continuing wrong and injury may be cured by judicial remedy.

"Article 13(2) of the Constitution prohibits the State to make law to take away fundamental rights but the 1991 Act takes away the rights of Hindus, Jains, Buddhist and Sikhs to restore their ‘places of worship and pilgrimages’, destroyed by barbaric invaders. The Act excludes the birthplace of Lord Rama but includes the birthplace of Lord Krishna, though both are incarnations of Lord Vishnu, the Creator and equally worshiped throughout the word, hence it is arbitrary," he said.

Upadhyay also pointed out the mosque constructed at temple land cannot be a mosque, not only for the reason that such construction is against Islamic law, but also on grounds that the property once vested in the deity continues to be deity’s property and right of deity and devotees are never lost, howsoever long illegal encroachment continues on such property.

He also said by the 1991 law, the Centre has transgressed its legislative power in barring remedy of judicial review, the basic feature of the Constitution.

Moreover, the provisions of 1991 Act cannot be implemented with retrospective effect and the remedy of disputes pending, arisen or arising cannot be barred. The Centre neither can close the doors for aggrieved persons nor can take away the power of District Court, High Court and Supreme Court of India, he asserted.

"The 1991 Act, without resolution of dispute through the process of law, has abated the suit and proceedings, which is per se unconstitutional and beyond the law-making power of the Centre," he said.