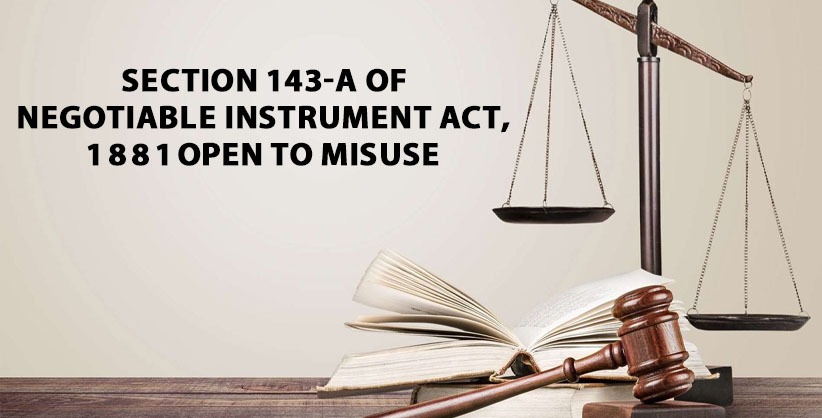 The understanding of common man, "everybody is innocent unless proven guilty", but now a
draconian law has been introduced by way of an amendment in the Negotiable Instrument Act vide Amendment Act 20 of 2018 with effect from 01.09.2018, incorporating section 143-
A which provides the payment of interim compensation to the complainant even the accused
pleads not guilty to the accusation made in the complaint.

That as per the section 143-A of The Negotiable Instrument Act, the court trying an offense
under section 138 may order the drawer of the cheque to pay interim compensation to the complainant even where the accused is denying its liability or pleading not guilty to the accusation of the complainant which shall not be exceeding 20% of the amount of the cheque payable within 60 days. As per the liberal interpretation, the amount payable as an interim compensation can be fastened upto 20% of the amount of cheque while incorporating section 143-A, the legislature has probably skipped to understand the real interpretation of section 138 in order to attract the said provision, according to which if a cheque drawn by a person on an account maintained by him with a banker for payment of any amount of money to another person from out of that account for the discharge in whole or in part of any debt or other liability is returned by the bank unpaid either because of the
amount of money standing to the credit of that account is insufficient to owner the cheque or that it exceeds the amount arranged to be paid from that account, would attract the penalty/offense under section 138.

Therefore, the first condition which is precedent that the cheque has been issued in discharge of any debt or other liability which should be legally enforceable debt or liability and therefore, until and unless the same is proved, no offense under section 138 is made out and that can only be seen after the evidence adduced by the
parties or at the time of final adjudication of the complaint but now by means of section 143A, the accused is fastened with a liability for the payment of interim compensation to the complainant not exceeding 20% of the cheque amount.

That by incorporating section 143-A, the legislature has relegated the parties to fight firstly for the payment of interim compensation which would take lot of time of the courts and the order passed thereupon is always assailable to the higher courts which would further consume the time of higher courts and ultimately, if the complainant fails than the
complainant is required to refund the interim compensation with interest at the bank rate as
published by the Reserve Bank of India within 60 days after the acquittal of accused, which
further would be a difficult to recover from the complainant who might have utilize that amount or misappropriated, for that another set of proceedings have to be initiated which would further a burden upon the already over burdened legal system.

That even if the payment of interim compensation has not been paid us the same shall be recoverable as a fine provided under section 421 of Cr.P.C., which is also a very cumbersome and lengthy procedure, as there would be an attachment and sale of any immovable property followed by warrant/arrest, in which the entire machinery of the court and local
administration would be involved as the same is equivalent to a recovery as an arrear of land
revenue as provided earlier in the U.P.Z.A. & L.R. Act and now under the U.P. Revenue Code.

Therefore, the provision of 143-A is not at all beneficial legislation as the same has only taken care one side of the litigant by ignoring the plight of accused who might have been involved in a false case by misusing the cheque.

This is clearly evident in the order of Hon'ble High Court of Karnataka in the case Vijaya Vs. Shekharappa and others, the Hon'ble Court thus observed that there is no application of mind as to why the said compensation has to be awarded. Section 143-A is completely misread that once the accused does not plead guilty, the complainant becomes automatically entitled to 20% of the cheque amount as interim compensation.

Therefore, the legislature has cautiously worded sub section 1 of section 143-A not to make
it mandatory in all cases, where clause A & B of sub section 1 would empower the learned Magistrate before whom proceedings are pending consideration to award interim compensation. It is the discretion conferred, as the word used is "may". If the order is passed
then the payment is mandatory. Therefore, the learned Magistrate who is hearing the application for interim compensation should apply his mind, record his reasons in exercise of his discretion, as to why 20% of the cheque amount is to be granted as interim compensation
in any given case.

That the different High Courts in the country have interpreted section 143-A in different
matter where some courts have held that it is discretionary and not mandatory but on the other hand, other courts have held otherwise. Therefore, it is expected from the legislature to enact such law which is beneficial for both the factions and not helpful to one party so that each side of the coin is looked upon. The legislature while enacting any law must take
care and consider the plights of the litigants and as well as the over burdened courts in the country by not introducing any provision which would further increase the burden of our courts.

Therefore, it is suggested to reconsider the provision of 143-A in a manner to avoid its misuse and to make it more convenient for both parties and as well as to the court and administration in order to avoid the precious time of the courts.

* The author is an advocate of Allahabad High Court, practising on civil and criminal side for the last 17 years.

The Author is an advocate practicing in Allahabad High Court. The view expressed are personal to the author.