Home Speak Legal Does the Waqf board hold any relevance in the secular India of today?
Speak Legal

Does the Waqf board hold any relevance in the secular India of today? 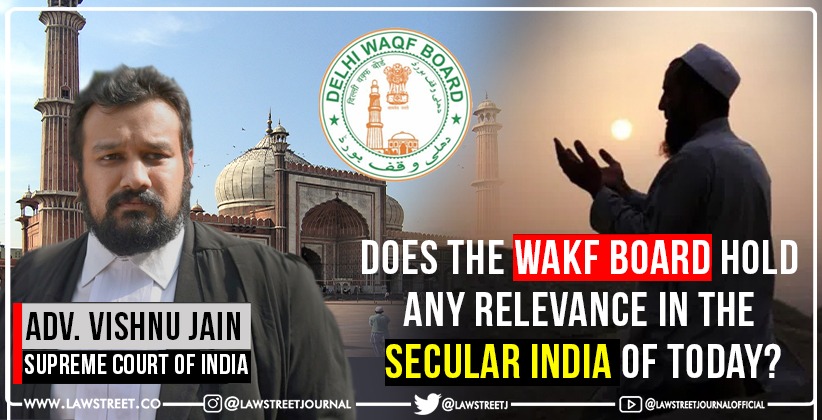 The problem of illegal land encroachments in the name of religion isn’t new in India. It has been enumerated via a series of incidents how establishments such as the Central Wakf Board could be illegally gaining control of land by terming them as ‘Waqf’ properties.

The same board has time and again been accused of acquiring lands and public places by fraudulent means, and the relevance of their acts has rightly remained questionable.

Advocate Jain has lashed out on the outdated, biased, and prejudicial provisions of the Wakf Act, namely sections 40, 51, 52, 54, 83, 92, 101, and 107 of the Wakf Act. He noted that these provisions confer unfair and unjustifiable powers in the hands of the Wakf Board as well as the Wakf Tribunal. At the same, the legal tenants under the act also exempt any suit for possession of immovable property comprised in any wakf from the provisions of the Limitation Act, 1986.

In a dialogue with former bureaucrat Sanjay Dixit, Advocate Jain can be seen lamenting over the very question as to why the government of the country and the e parliament hasn’t considered modification or quashing of such unfair provisions and on what basis is such a religious propaganda under the garb of law being permitted. Here’s a bare perusal of some of the startling provisions of the Wakf Act, 1955 as seen in the virtual clip:

Under section 40 of the Wakf Act, the Wakf Board can decide on any property being Wakf property without any additional basis. It states that: ‘Where the Board has any reason to believe that any property of any trust or society registered in pursuance of the Indian Trusts Act, 1882 (2 of 1882) or under the Societies Registration Act, 1860 (21 of 1860) or under any other Act, is wakf property, the Board may notwithstanding anything contained in such Act, hold an inquiry in regard to such property and if after such inquiry the Board is satisfied that such property is wakf property, call upon the trust or society, as the case may be, either to register such property under this Act as wakf property or show cause why such property should not be so registered.’ This provides grounds for illegal encroachment of land by the Board and should rightly be checked.

Those aggrieved by the acts of the Wakf Board will have to seek reliance on the Wakf Tribunal, which has been conferred with all the powers of a Civil court. Section 83 of the Wakf Act to this effect further states that ‘No appeal shall lie against any decision or order whether interim or otherwise, given or made by the Tribunal: Provided that a High Court may, on its own motion or on the application of the Board or any person aggrieved, call for and examine the records relating to any dispute, question or other matter which has been determined by the Tribunal for the purpose of satisfying itself as to the correctness, legality or propriety of such determination and may confirm, reverse or modify such determination or pass such other order as it may think fit.’ This prohibits applicants from seeking due legal recourse and also leads to the concentration of power in the hands of the tribunal.

The Wakf Board also has the right to appear and plead as a party to the suit or proceeding any suit or proceeding in respect of a wakf or any wakf property. In the normal course of law, doing so will require an application to be made to the right authority subject to its approval or otherwise. However, under the provisions of Section 92 of the Wakf Act, the Board can become a party to the suit without having to go through any of these steps. This again leads to the assumption of excessive power in the hands of the Wakf Board.

To make matters worse, Section 101 of the Wakf Act further deems the Survey Commissioner, members, and officers of the Board as public servants. To this, Advocate Jain rightly pointed out that no such persons of a religious board or Temple Authority, and neither the Hindu priests have been given such status under any laws in the country.

Section 107 of the Act further states that: ‘Nothing contained in the Limitation Act, 1963 shall apply to any suit for possession of immovable property comprised in any wakf or for possession of any interest in such property.’ This confers powers on the Board and other interested members to claim action at any given time on an event that could have happened at any given point in time. Such broad powers could once again be detrimental to justice.

Lastly, stating that the Wakf Board is nothing but a religiously spirited group, Advocate Jain pointed out that the sheer basis for the formation of the Board itself is debatable. As stated in Section 4 of the Act, ‘the Board for a State and the Union Territory of Delhi shall consist of— a Chairperson; one and not more than two members, as the State Government may think fit, to be elected from each of the electoral colleges consisting of, Muslim Members of Parliament from the State or, as the case may be, the Union territory of Delhi, Muslim Members of the State Legislature, Muslim Members of the Bar Council of the State, and, mutawallis of the wakfs having an annual income of rupees one lakh and above.’

Towards the end of the clip, Advocate Jain can be seen questioning the leaders of our land, the Central Government, and the parliament to look into the above and review such biased provisions for the greater good of all.  In the end, we are made to question if India is a secular country in the true sense of the term, after all!