Thank You, Supreme Court For This Historic Day-Night Hearing 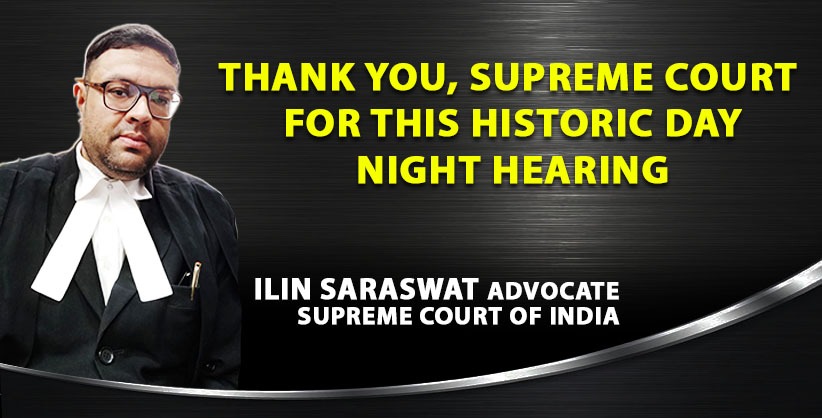 The recent hearing on the 30th September 2022 at the Honorable Supreme Court of India which concluded late night at 9 pm, a few hours before the commencement of Dussehra holidays was a commendable effort by the Supreme Court bench presided by Hon'ble Justice DY Chandrachud and Hon’ble Justice Hima Kohli.

I personally attended the late-night Court as my matter came up for hearing around 8 p.m. in the night. There were some mixed reactions over this late-night hearing of Supreme Court by some members of the Bar wherein some members opposed the continuous sitting till late night held by the Apex Court's bench whereas some members (mostly) were in support of it.

The opposing members were worried for the Junior female lawyers and interns who had to travel back home late in the night by public transport, some to places afar and some senior aged lawyers who had difficulties regarding health and other transport issues. But on the whole, the majority of Bar members lauded this late-night hearing of the Supreme Court by asserting that the Supreme Court should repeat this effort more often to expedite disposal of the piled-up cases in queue. Even my case was caught up in adjournments for many months but the sheer willingness of the Honorable Bench, to expedite pendings, made it possible to dispose my case finally which is reserved for judgement. I and my team were quite pleased.

I am in agreement with the Bench that commented during this hearing, at about 7:30PM, that the mind tends to settle down during late evening and a new thrust of energy among the lawyers and judges, makes it possible to hear the matters at length as there is no urgency for the Bench to arise at 4/ 5 p.m. It was a pleasant new experience for me of the late-night Court proceedings, infact a great experience with respect to the grinding hardwork manner of the Judges of the Supreme Court and the esteemed fraternity of our lawyers.

The bench headed by Hon'ble Justice Chandrachud heard 77 matters in all and ultimately disposed of them. No doubt there were some problems faced by the Bar members, me included, but the same went for the Bench too which heard each and every single case listed on the cause list in a positive manner. We were hungry, they were hungry, we were thirsty and they were thirsty but, both the bar and the bench coordinated in such a beautiful manner which makes it a historic day in the history of Honorable Supreme Court of India which can makes the one only proud and nothing less.

The credit goes to the lawyers and their patience and definitely to Hon'ble Justice DY Chandrachud and Hon’ble Justice Hima Kohli who with all the due respect heard all the matters with calmness and patience, continuously. It should be noted that the Bench didn't arise for a long lunch break.

I tender my special heartfelt thanks to the Bench and its staff and the Supreme Court Bar Association of-course, for this historic day of hearing.

DISCLAIMER: The author is an advocate practicing in the Supreme Court of India. The views expressed are personal to the author.