Not Everything is Justified and Healthy in Supreme Court 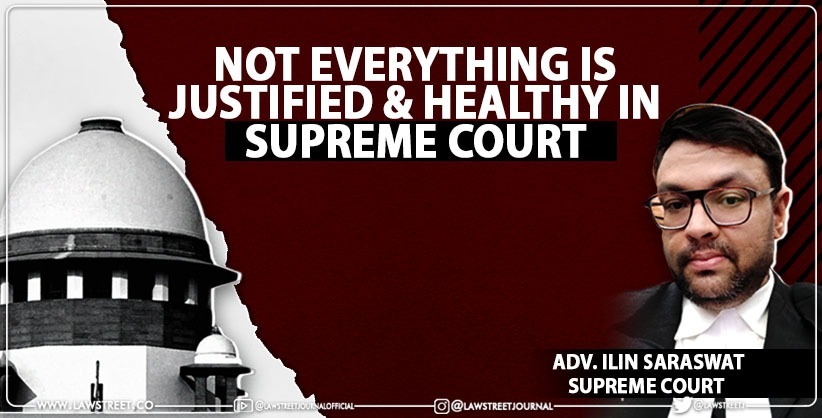 A continuous request by members of the Bar and its leaders for urgent opening of a dedicated redressal window for the lawyers and continuously facing problems in case filing, re-filing and listing the matters especially urgent matters, e.g. bails and stays in the Supreme Court is pending since long and with no action been taken by Supreme Court Secretariat, till date.

After the hearings, the days pass by and orders by Hon'ble Justices are not being uploaded by Court Masters/Registry on the same day on website, and it is found on many occasions of incorrect and mis-spellings even in the names of Advocates appeared/argued in the Case with no mechanism of redressal.

Recently, in the hearing before the bench of a very Senior Judge of the Supreme Court, it came to the knowledge that a case/item had been deleted from the cause list of that day and the Hon'ble Presiding Judge was surprised as he had read and prepared the matter the previous night for hearing, but was not informed by the Registry regarding deletion of matter. The Hon'ble Judge took serious note of this and asked the registry for an explanation to reply before the afternoon of that day.

This style of working and behaviour by Supreme Court Registry Officials is sheer harassment of Lawyers and the staff including young associates.

The permanent regular members of the Supreme Court Bar Association (SCBA) face hurdles entering the main premises of the Supreme Court, e.g. Body searching, proximity cards checks and gate pass verification by police officers deployed on gates sometimes behaving improperly with Advocates. Even permanent members of the SCBA face difficulties during entering into Court Rooms entrances as the police officials asks for entry pass of that particular court or the proximity card.

Such treatment of the bar members who form an integral part of this esteemed institution is uncalled for.

The Supreme Court Bar, regularly asks the Secretariat for provision of better facilities for members be it chambers, parking space around main building of Supreme Court, sitting areas for young lawyers along with, is not addressed. There is a petition pending in Supreme Court regarding an idea of Supreme Court Vista and a reply from Government is pending. May be, the idea od Supreme Court Vista would solve these problems. Recently the President, SCBA has written a letter to the Ministry of Law and Justice with respect to allotment of land lying vacant between Pragati Maidan and ITO area for the construction of new chambers and seat area for members. Hopefully Law Ministry will do the needful.

Also, the system of applying and making of new fresh proximity cards of members by Supreme Court is very tedious and most of the time their server and website is down. Old senior advocates who are not well versed technically face difficulties in application for new proximity cards.

The non-recognition of SCBA membership Identity Card for premise entry is another issue to be highlighted which the Supreme Court Secretariat should look into it and allow the identity card as valid and good as the proximity card is.

As the journalists and interns occupied many seats inside the Court Rooms in morning the old and senior advocates face difficulties while standing and waiting for their cases are being called. There are no separate seating system for Journalists etc. in most of the Court rooms. Recently it was witnessed in a courtroom that a young lawyer behaving in a rude manner with two old and designated senior advocates re. the seating issue.

These are the crucial issues which need an immediate attention by the Supreme Court Secretariat and also by Supreme Court Bar Association.

It should be remembered that the Bar and the Judges are the equal participants of the institution of Supreme Court, and need to work together to strengthen this great institution.

The Author is an advocate practicing in the Supreme Court of India. The views expressed are personal to the author.

Minority Status should be at State Level || Watch Report