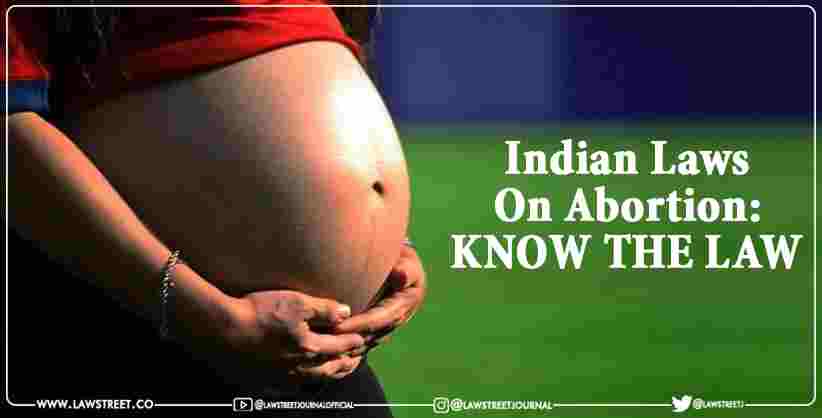 There are now serious debates going around the Supreme Court of the United State's decision to overturn the ruling in Roe v. Wade, which declared that there is no constitutional right to abortion. Rights activists and prominent public figures including US President Joe Biden and former US President Barack Obama have harshly criticized the judgement given by the US Supreme Court.

Abortions is defined differently in both legal and medical world. Legally we define induced abortion as voluntarily and untimely delivery of the foetus with the motive of destroying it. It can be done any time before the birth of the child. In medical world they define abortion as untimely delivery of a child before twenty-eighth week of pregnancy. To deal with abortion, government made the law under The Indian Penal Code,1860 which is the basic criminal law of the country. They made induced abortion punishable under Section 312 to 316 of IPC.

The Indian Penal Code, 1860 deals with criminal law of our country and it takes into account all the religious, moral, ethical circumstances of our Indian community and thus, have made abortion an illegal offence under Section 312 to 316 of the Code. Section 312 of the said code provides for causing miscarriage. According to the Section ``whoever (including women) voluntarily causes a woman with a child to miscarry the child shall be liable for imprisonment of either description which may be extended to 3 years or with fine or with both, provided that such miscarriage shall not be caused in good faith; and in case the women is quick with the child the punishment may be extended upto 7 years or with fine or both''.

The term “abortion” has nowhere been used in the code. The terms used in the code are “miscarry” and “unborn child” and none of these words have been defined anywhere in the code. However, with the help of legal precedents and interpretations we came to know that miscarriage means causing criminal abortion. The aforementioned Section has been divided into two parts: “with child” and “quick with child”. The former means as soon as gestation begins and the latter means when the motion of the foetus can be felt. The termination of pregnancy cannot be done unless and until it has to be mandatorily done to save the life of the woman.

Section 315 provides that when a person does any act to prevent the child from being born or to cause it to die after birth and does the act without good faith for purpose to save the life of the woman shall be punished with imprisonment of either description which may be extend to 10 years or with fine or with both. Lastly, Section 316 states that any person who causes the death of a quick unborn child with the act which would have made him liable for the offence of culpable homicide and causes death of quick unborn child with such offence shall be punished with imprisonment which may extend to 10 years and with fine.

The Medical Termination of Pregnancy (Amendment) Act, 2021 alters the MTPA 1971 to raise the upper limit for abortion from 20 to 24 weeks for certain types of women. The Amendment raises the upper gestation limit from 20 to 24 weeks for particular groups of women, which would be described in the MTPA 2021 and would include rape survivors, incest victims, and other vulnerable women (such as differently-abled women, minors), among others.

The MTPA 2021 was approved on the 16th of March, 2021 thereby amending the provisions of the MTPA 1971. The Act in general governs when and how pregnancy can be terminated. The bill extends the time frame for abortion.

This amendment is a welcome step towards the safety and well-being of the women in the country. There were several petitions which have been recently filed in the courts asking for authority to abort unwanted pregnancies at a gestational age beyond the current permissible limit due to foetal abnormalities or pregnancies caused by sexual assault. The amendments aim to broaden the scope of safe abortion services available to women and ensure their dignity, autonomy, secrecy, and justice for women who need to end their pregnancies.

● Raising the upper gestation limit from 20 to 24 weeks for particular groups of women, which would be described in the MTPA 2021 and would include rape survivors, incest victims, and other vulnerable women (such as differently-abled women, minors), among others.

● The Act enables abortion on the recommendations of one doctor up to 20 weeks, and two doctors between 20 and 24 weeks for specific categories of women.

● In 2021 a specific clause in the Act Section 5A, mandating that the doctor should not reveal the name and particulars of the woman whose pregnancy was terminated.

Grounds for Terminating a Pregnancy:

In general, there are two opposing viewpoints on the legalization of abortions. According to one viewpoint, terminating a pregnancy is the pregnant woman's option and a part of her reproductive rights. The alternative viewpoint is that the state commits to safeguard life and, as a result, the foetus should be protected. Depending on considerations such as foetal viability (the point at which the foetus can live outside the womb), foetal abnormalities, or harm to the pregnant mother, various countries across the globe have imposed varied requirements and time restrictions for legalizing abortions.

In India, The MTPA 1971 was created as an exemption to the IPC to allow certified medical practitioners to terminate certain pregnancies. The MTPA,2021 does not identify which women are eligible to terminate pregnancies between 20 and 24 weeks and instead leaves it to be determined by rules. Such topics, it may be claimed, should be specified by Parliament rather than delegated to the executive.

The Act even after the Amendment is more doctor-centric and less woman-centric. It can also be said to be a selective right as it creates a binary distinction. Even after the landmark cases such as NALSA v Union of India and Navtej Singh Johar v. UOI the right under the Act despite proposed amendment fails to extend to third persons, transgender or non-binary persons who are victims of unintended pregnancy.

In the case of Sharmishtha Chakraborty and Anr. v. Union of India Secretary, the issue in the Hon’ble Supreme Court was whether a medical termination be permitted in the twenty fifth week of pregnancy. It was decided that the medical reports need to be consulted before any decision. If the foetus is in abnormal conditions and it is born alive, it would require multiple corrective surgeries. Then the termination of pregnancy shall be considered. Similarly in the case of Priyanka Shukla v. Union of India and Ors., the Delhi High Court suggested that the right to terminate the pregnancy shall not be denied merely because the gestation period has continued beyond twenty weeks.

The Supreme Court of India in the case of K.S. Puttaswamy v. Union Of India, has already established that reproductive choice is personal liberty guaranteed under Article 21 of the Indian constitution. Despite creating a robust jurisprudence on reproductive rights and the privacy of a woman, Article 21 of the Indian constitution does not translate into a major transfer of power from the doctor to the woman seeking an abortion. As a result, abortion is still linked to state-sanctioned conditions rather than a woman's rights.

The MTP Act expressly states that pregnancy cannot be aborted without the consent of the woman under Section 3(4). In a landmark decision in Suchita Srivastava v. Chandigarh Administration (2009), the Supreme Court affirmed the right of a mentally challenged person to choose to continue with pregnancy.