Home Know The Law Are we Really Equal as per Article 14 of the Indian Constitution?
Know The Law

Are we Really Equal as per Article 14 of the Indian Constitution? 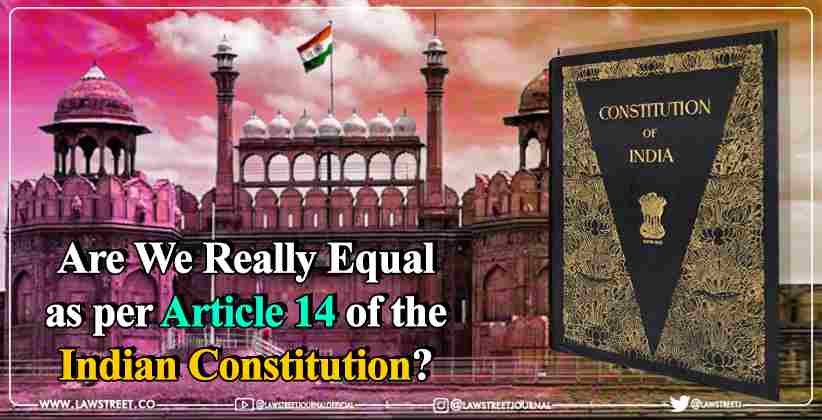 Article 14 of the Constitution of India says that the State shall not deny to any person equality before the law or the equal protection of the laws within the territory of India. This provision confers rights on all persons whether citizens or foreigners.

Moreover, the word ‘person’ includes legal persons, viz, statutory corporations, companies, registered societies, or any other type of legal person. The concept of ‘equality before the law’ is of British origin while the concept of ‘equal protection of laws’ has been taken from the American Constitution. However in 1949 when the Constitution of India was in formation there was a huge debate on this provision, i.e., Right to Equality, in the Constituent Assembly.

In particular, no citizen shall, on grounds only of religion, race, caste, sex, or any of them, be subjected to any disability, liability, restriction, or condition with regard to – assess to shops, public restaurants, hotels, and places of public entertainments.

On this Mr. Rohini Kumar Chaudhury, proposed to insert “or of dress worn of any nationality”, after “sex”. He suggests this because at the event at the threshold of independence there were hotels that do not allow welcome people that dressed in Indian style.

Mr. C. Subramaniam, one of the members of the Constituent Assembly, suggested that the State has no power to discriminate in the above-mentioned matters. He also proposed to remove the words “In particular‟ and also suggested using a separate clause i.e. 9(1a). It must be read as, “No citizen shall, on grounds only of religion, race, caste, sex or any of them be subjected to any disability.”

Thereafter Mr. Syed Abdur Rouf suggested inserting the words “place of birth” instead of the word “sex” because he was afraid that there may remain chances of discrimination to be done based on place of birth.

Then Prof. K.T. Shah suggested, through an amendment, to use the word “religion” in place of the word “creed”. He further suggested that there is no need to give or mention the list of different kinds of public places. He connoted the word “public place” in a wide sense. He admitted that the Constitution of India is based on the principle of democratic equality. So, he considered it useless to mention the names of every public place in the said Article. He further specifically insisted that to stop sectarian or denominational exclusiveness, schools, hospitals, asylums, etc. shall not be reserved for any reason and any given sect, or community. He also stated that all public places must be made open and accessible to all citizens of the country. This shows that he wanted to promote perfect and real equality among the citizens of India. He then adhered that opening up of any institution that benefits only a given community or given members or fund providers, in reality, lacks civic sense. According to him such a concept or idea is against the equality of citizenship. However, the said amendment was later not moved.

Thereafter, Dr. B.R. Ambedkar moved, “That in sub-clause (b) of the second paragraph of clause (1) of Article 9, for the words `the revenues of the State' the words `State funds' be substituted." This amendment was later adopted.

Shri S. Nagappa thought that the population of India must be politically free as well as socially free. According to him, freedom means political, social, and economic freedom. He wished that social rights must be given to a particular community under the present article. He admitted that obtaining social rights are more expansive and explanatory. He wanted to focus on the issue of the economic evaluation of the downtrodden classes of Indians. He meant that if economic rights are given to downtrodden people then they need not have to approach courts frequently for accessing justice. The amendment was not adopted.

Sardar Bhopinder Singh Man suggested that “at the time of deciding about the fundamental rights, it would be incomplete if places of worship are not included in the list of such rights.” According to him places of worship must be kept open for all and such places must be in the custody of ultimate custodians or pujaris. He wanted that the barriers of religion must be removed permanently. This amendment was adopted.

The framers of the Indian Constitution aimed at non-discrimination by the state against any citizen on grounds of race, religion, caste, sex, or any of them. The said article is framed for the citizens of India. The protection of the said article is given only to the citizens. They have specifically mentioned that there must be no chances of flourishment of denominational, sectarian, and communal institutions. They wanted the flourishment of real democracy. They wanted that any social institution founded by any particular community must benefit the entire society and not only the particular community. In other words, the beneficiary of the social institutions must be the society at large.

Later by discussion Article 9 was divided into Article 14 and Article 15 and on 26th November 1949, the Constitution of India was adopted.

Is Places Of Worships Act a Conspiracy against Hindu Temples? [Read PIL]