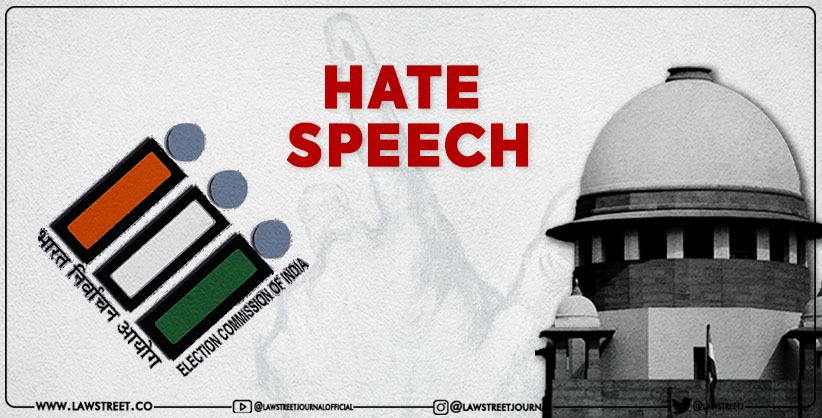 NEW DELHI: The Election Commission has told the Supreme Court that in absence of specific law on 'hate speech' and 'rumour mongering' during the polls, it employed provisions of the Indian Penal Code and the Representation of People Act to ensure that members of the political parties do not make statements for creating disharmony between different sections of the society.

In a written response to a PIL filed by BJP leader and advocate Ashwini Kumar Upadhyay for the Centre to bring legislative measures for hate speech and rumour mongering, the poll panel said it takes strict note if any candidate or his agent indulged in any speech that promotes, or attempts to promote, feelings of enmity or hatred between different classes of the citizens of India on grounds of religion, race, caste, community, or language.

It said the EC, in such cases, issues a Show Cause Notice to the concerned candidate or person calling upon him/her to submit his/her explanation. Based upon the reply, it issues advisories cautioning such defaulting candidate/person or prohibiting him/her from campaigning for a specified period of time or even initiation of a criminal complaint, in case of repeat offenders.

The poll panel also pointed out it had already issued 'Model Code of Conduct for the Guidance of Political Parties and Candidates' and Do's and Don'ts for them after the announcement of elections and till the completion of the process.

These included "there should be no appeal on basis of caste/communal feelings of the electors; and no such activity should be attempted, which may aggravate existing differences or create mutual hatred or cause tension between different castes/communities/religious/linguistic groups."

Further, the poll panel said, in Jafar Imam Naqvi vs Election Commission of India (2014), the petitioners sought a mandamus from the Supreme Court to the Election Commission to withdraw the recognition given to such political parties resorting to illegal activities and to cancel the candidature of politicians found guilty of vitriolic speeches before declaration the election results.

"However, this court dismissed the writ petition on the ground that the petition under Article 32 of the Constitution regarding speeches delivered during election campaign does not qualify as public interest litigation and that the Court cannot legislate on matters where the legislative intent is visible," it said.