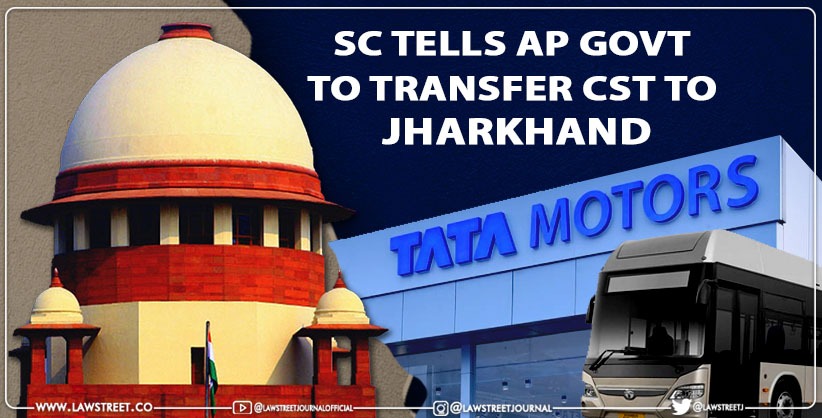 A bench of Justices M R Shah and Krishna Murari said that even though it is not in dispute that the transaction is in the nature of inter-state sale. Tata Motors was liable to pay central sales tax to Jharkhand.

Tata Motors Ltd, manufacturer Chassis of buses and trucks at Jamshedpur, supplied those to various states.

The company challenged the June 2009 order of the Central Sales Tax Appellate Authority that refused to adjust the tax amount paid on sales of buses to APSRTC against the tax to be paid to Jharkhand, though such transaction was found to be in the nature of inter-state.

The court noted that prior to insertion of Section 22(1B) to the Central Sales Tax Act 1956, there was no provision by which the tribunal could have issued directions for refund of the tax collected by the state, which had been held by the appellate authority to be not due to that state, or alternatively, direct that state to transfer the refundable amount to the state to which central sales tax is due on the same transaction.

However, after the provision was inserted by the Finance Act 2010 the authority was given powers to issue such direction for refund of tax, provided that the tax amount directed to be refunded by a state shall not exceed the amount of CST payable by company on the same transaction, it added.

"In this case, the transaction was for the period prior to insertion of Section 22(1B), therefore, it cannot be said that the appellate authority had committed any error in not issuing any direction which is now permissible," the bench said.

However, at the same time, Andhra cannot retain the amount of central sales tax paid by Tata on the transaction of sale effected through RSO, Vijayawada with respect to vehicles/buses sold to APSRTC, the court said.

"Therefore, in line with Section 22(1B) of the Act 1956, Andhra is directed to transfer to Jharkhand the amount of central sales tax deposited by the company, subject to Tata submitting the proof of CST already paid on the vehicles/buses sold to APSRTC treating the same as stock transfer sale. After due verification, the amount so paid by Tata should be transferred to Jharkhand immediately and latter is directed to adjust the same towards Tata’s CST liability. The exercise shall be completed within a period of three months," the bench said.