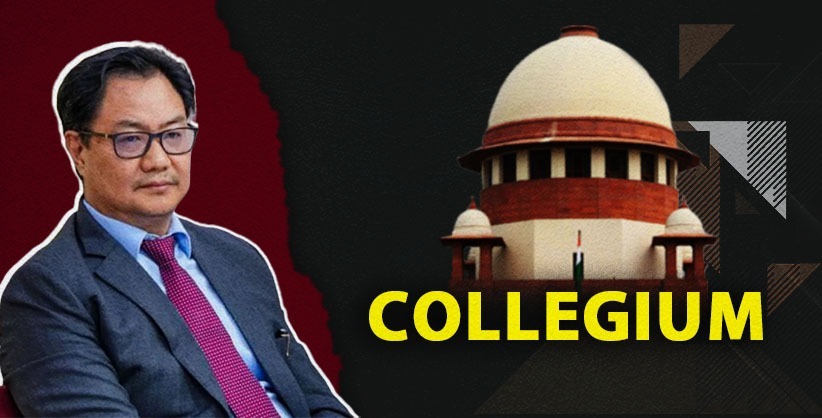 NEW DELHI: The Supreme Court on Monday objected to Union Law Minister's statement on Collegium system for appointment of judges, saying once the recommendations have been reiterated, the names have to be cleared, that is the end of the matter as per the law as it stands on the day.

Hearing a contempt petition filed by Advocates Association, Bengaluru, a bench of Justices Sanjay Kishan Kaul and Abhay S Oka sought to know if the recommendations by the Collegium are being withheld since the the Union government's 2014 law on setting up the National Judicial Appointment Commission could not pass the muster and declared unconstitutional by a five-judge Constitution bench.

Senior advocate Vikas Singh referred to Law Minister Kiren Rijiju's interview to a TV channel, in which he said, "Never say that the government is sitting on the files, then don't send the files to the government, you (Collegium) appoint yourself, you run the show then".

On Singh's reference to the Minister's statement, the bench said, "We have expressed our anguish. It appears that the government is not happy that the NJAC has not passed the muster. Can that be the reason to not clear the names."

"When someone high enough says that it should not have happened. We have ignored all press reports, but this has come from somebody high enough also," the bench asked the Attorney General R Venkataramani.

The bench said the whole process for appointment of judges already takes time.

The bench said the Centre by not appointing judges recommended by the Collegium, was “frustrating the system”. "They are picking and choosing names which is affecting seniority," the bench said, adding, "we keep thinking things will improve, and are straining ourselves to not issue contempt against the Centre."

“When they move, they move within a day. When they don't, they don't (do it) for months,” the court observed.

The court told the law officers to convey the "sentiments of the bench" to the government and ensure that law of the land is followed.

The court would further hear the matter on December 8.

The AG, for his part, said he would try to resolve the deadlock.

The bench had on November 11 had expressed its strong displeasure over delay in appointment of judges, saying unless the bench is adorned by competent lawyers very concept of 'Rule of Law' and 'Justice' suffers.