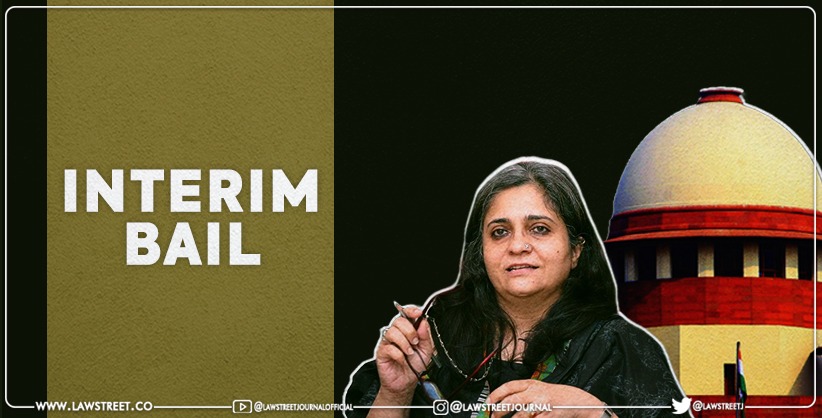 NEW DELHI: The Supreme Court has on Friday granted interim bail to activist Teesta Setalvad, in a case of fabricating evidences in 2002 Gujarat riots cases, on the ground that she was a woman and the investigating agency had already interrogated her in custody for seven days after her arrest on June 25.

A bench of Chief Justice U U Lalit and Justices S Ravindra Bhat and Sudhanshu Dhulia also considered the facts that the offences alleged against her related to the years 2002 to 2012 as per the FIR filed against her.

"The essential ingredients of the investigation including the custodial interrogation having been completed, the relief of interim bail till the matter was considered by the High Court was certainly made out," the bench said.

"We hasten to add that the relief of interim bail is granted to the appellant in the peculiar facts including the fact that the
appellant happens to be a lady. This shall not be taken to be a reflection on merits and shall not be used by the other accused," the bench further said, in its written order.

Setalvad, represented by senior advocate Kapil Sibal, challenged the orders passed by the sessions court on July 30 as well as by the Gujarat High Court on August 3, which had refused to grant her interim relief and posted her petition for hearing on September 19.

The FIR filed against Setalvad and others namely former senior police officers R B Sreekumar and Sanjiv Bhatt cited the Supreme Court's judgement in Zakia Ahsan Zafri and others Vs State of Gujarat, passed on June 24.

The top court had then, stated, “There is material in the final report submitted by the SIT which indicates that Teesta Setalvad had conjured, concocted, forged and fabricated facts and documents and or evidence including fabrication of documents by persons who were prospective witnesses of the complainant. It is not only a case of fabrication of documents, but also of influencing and tutoring the witnesses and making them depose on pre typed affidavit, as has been noted in the judgment of the Gujarat High Court dated 11.07.2011 in Criminal Misc. Application No.1692 of 2011.”

In arguments advanced in her favour, Sibal said the facts narrated in the FIR are nothing but recitation of the proceedings which ended with the judgment and order dated June 24, 2022 by this court.

Further, the counsel said, the offence alleged against her is not even made out and as such, there is strong prima facie case in her favour. Moreover, she has been in custody for more than two months, so, at this stage, she is certainly entitled to the relief of interim bail during the pendency of the consideration of her substantive application by the High Court.

Opposing the submissions, Solicitor General Tushar Mehta along with Additional Solicitor General S V Raju, appearing for the Gujarat government, submitted that there is sufficient material, apart from whatever has been adverted to in the FIR, pointing towards the involvement of the appellant.

The state counsel also said the application for bail is presently pending before the High Court, the matter must be allowed to be considered by the High Court rather than entertaining the challenge at this stage before this court. Mehta also submitted it would set a bad precedent if the apex court entertained her plea.

They also said the High Court should be allowed to consider the matter on date fixed.

On this, the bench said, "We need not go into the rival contentions touching upon the merits of the matter...We are alive to the fact that the matter is still pending consideration before the High Court. We are therefore not considering whether the appellant be released on regular bail or not. That issue will be gone into by the High Court in the pending application."

The bench said it considered the matter only from the standpoint whether during the pendency of her application before the High Court, and custody of the appellant can be insisted upon or whether she can be granted the relief of interim bail.

"Having considered the circumstances on record, in our view,  the High Court ought to have considered the prayer for release of the appellant on interim bail during the pendency of the matter," the bench said.

The court directed that the appellant should be produced before the sessions court on Saturday and be released on interim bail on conditions deemed appropriate by it to ensure her participation in pending proceedings.

On a request by her counsel, the court also directed the sessions judge to consider releasing her on cash security or bond without insisting upon the local surety.

The court also directed her to surrender her passport and render complete cooperation in the pending investigation.

The bench also clarified that it has considered the matter from the standpoint of interim without expressing any views on merits of the arguments and the High Court should consider the pending plea "independently and uninfluenced by any of the observations made in the instant order".

SC to examine backdoor appointments made in J&K Judicial Establishments