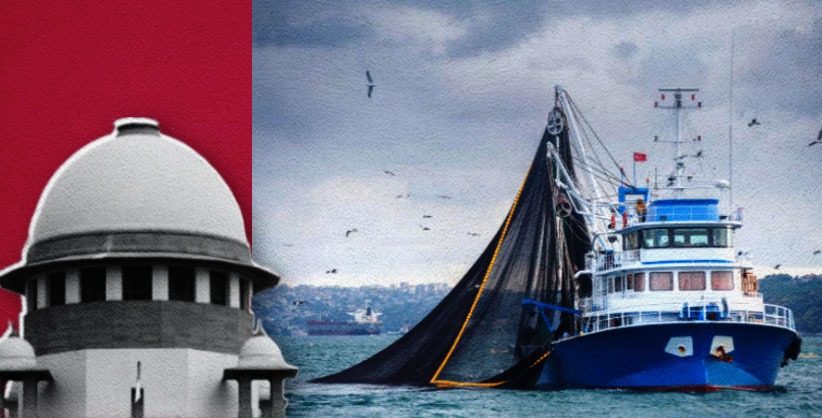 NEW DELHI: The Supreme Court on Tuesday allowed purse seine fishing (PSF) outside the territorial waters of Tamil Nadu, with stringent conditions to regulate it outside the 12-nautical-mile limit off Tamil Nadu.

"We are of a prima facie opinion, that interest of all parties need to be protected. Hence, we propose to pass a restricted interim order, allowing the purse seine fishing beyond the territorial waters of Tamil Nadu, but within the Exclusive Economic Zone, with certain conditions,” a bench of Justices A S Bopanna and Sudhanshu Dhulia said.

The bench said only registered fishing vessel, as on date, will be given permission i.e. a fishing vessel registered under Section 11 of the Marine Products Export Development Authority Act, 1972 (Central Act 13 of 1972) as well as registered with the state government under its rules or regulations, presently in force in Tamil Nadu.

“These vessels will be allowed to operate only twice a week i.e., on Monday and Thursday of each week with the other restrictions of non fishing period applying as is applicable to all other fishing activity. The vessels which will be given this permission shall leave the coastline on or after 8 AM and shall return to the designated place positively by 6 PM on the same day,” the bench said, in its order.

The bench noted that as far as the fishing beyond territorial waters, but within Exclusive Economic Zone (EEZ) is concerned, it has been told by K M Nataraj, Additional Solicitor General, that the central government has placed no restrictions on this method of fishing.

However, the coastal states are divided on this issue as Gujarat, Kerala, Andhra Pradesh, Odisha, Karnataka, Goa, and West Bengal have not made any restrictions on purse seine fishing, within its territorial waters, Tamil Nadu and Maharashtra have imposed ban on it.

In a plea by Fishermen Care, Registered Association, Tamil Nadu had vehemently objected to PSF, even beyond the 12 nautical mile border.

Senior advocate Mukul Rohatgi, representing the Tamil Nadu government, submitted that PSF is a ‘pernicious’ method of fishing, as it is harmful to marine life, including fish.

He claimed PSF is a non­selective fishing technology which captures all kinds of fish, which would include protected species as well, therefore it has a dangerous effect on ecology.

Rohatgi said the vast majority of fishermen of Tamil Nadu, who are traditionally engaged in fishing for their livelihood, cannot afford this technology and depend on traditional methods of fishing.

Senior advocate Gopal Sankaranarayanan, representing purse seine fishermen, had argued that a large number of families are also dependent, in one way or another, in the fishing  activity of the petitioner.

Moreover, the fishing season will come to an end by next month i.e. February 2023, and in case, they are not allowed to fish beyond territorial waters they would also be incurring a huge loss as there has been a large investment on their part for purchase of vessels as well as purse seine fishing nets, he added.

In its order, the top court said tracking devices should be installed in these boats and also prescribed a colour code for them. It further directed that fishing crew need to mandatorily carry identity cards.

The plea by Fishermen Care sought a stay on a Tamil Nadu government's order of February 17, 2020 which had banned the large nets used to catch schools of fish in the deep waters of the sea.

The Madras High Court dismissed the plea, forcing the Association to approach the Supreme Court, challenging the state government's decision.