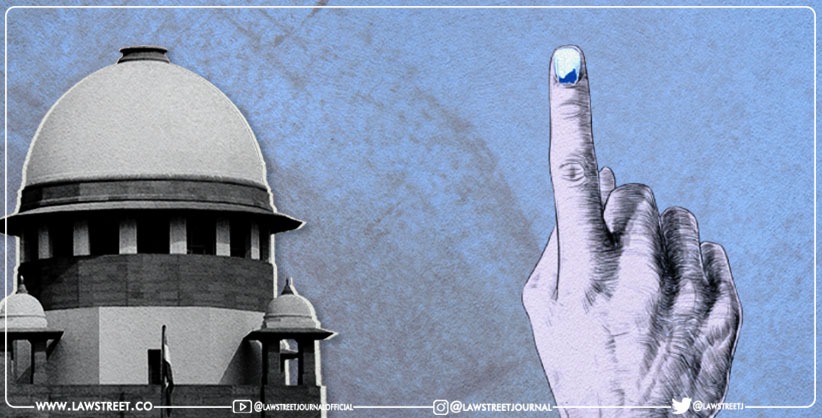 NEW DELHI: The Supreme Court has said that the right to contest an election is neither a fundamental right nor a common law right.

The apex court imposed Rs one Lakh cost on a man who sought to contest Rajya Sabha polls without a proposer in favour of his name.

“An individual cannot claim that he has a right to contest election and the said stipulation violates his fundamental right, so as to file his nomination without any proposer as is required under the Act,” a bench of Justices Hemant Gupta and Sudhanshu Dhulia said.

Vishwanath Pratap Singh filed a writ petition before Delhi High Court with regard to a notification for election to Rajya Sabha issued on May 12, 2022, to fill up the seats of members retiring from June 21, 2022 to August 1, 2022.

The last date for submission of the nomination was May 31, 2022.

In its order on September 9, the bench said, “The stand of the petitioner is that he collected nomination form but was not allowed to file his nomination without a proper proposer proposing his name. The petitioner sought his candidature without proposer which was not accepted and, therefore, he claims that his fundamental right of free speech and expression and right to personal liberty has been infringed”.

Referring to Rajbala vs State of Haryana (2016) judgement, the bench said this court had held that the right to contest for a seat in either of the two bodies is subject to certain constitutional restrictions and could be restricted further only by a law made by the Parliament.

Thus, the petitioner did not have any right to contest election to the Rajya Sabha in terms of the law made by the Parliament. The Representation of People Act, 1950 read with the Conduct of Elections Rules, 1961 has contemplated the name of a candidate to be proposed while filling the nomination form, the bench said

“We find that the writ petition before the High Court was entirely misconceived and so is the present special leave petition. The right to contest an election is neither a fundamental right nor a common law right. It is a right conferred by a statute,” the bench said.

The bench dismissed the special leave petition with cost of Rs one lakh only, to be paid to the Supreme Court Legal Aid Committee within four weeks.