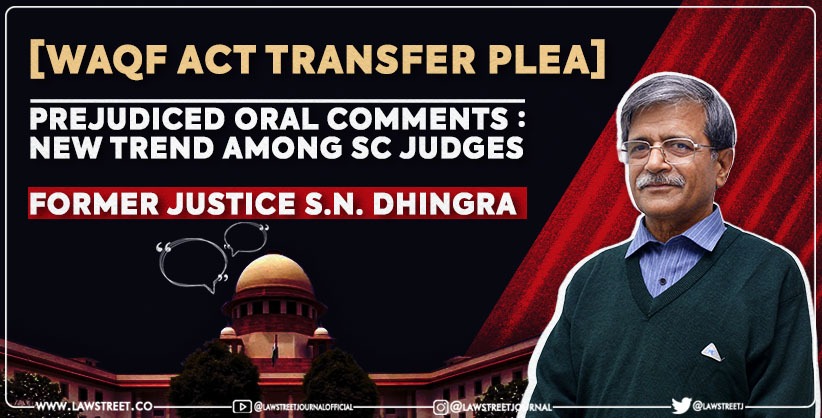 NEW DELHI: Former Delhi High Court judge, Justice S N Dhingra has expressed his strong reservations over the Supreme Court's judges making unwarranted comments based on media reports about a case being heard by them, showing their "prejudiced view and predetermined mind".

Referring to the SC's oral observations made on Monday on transfer petition on validity of Waqf Act by advocate Ashwini Kumar Upadhyay, he said, "The Supreme Court did not say anything on transfer plea whether it can be allowed or not but it formed an opinion based on media reports and questioned the petitioner citing the trusts formed in other laws. The court forgot that status of Waqf Board and that of trusts in other state laws is quite different."

"The question before the court was for transfer of the matter pending before the High Court and not on the issue of validity of Waqf Act," he added.

A bench of Justices K M Joseph and Hrishikesh Roy told senior advocate Ranjit Kumar, representing Upadhyay that the court was pained and shocked with the objection with the fact all the members of Waqf Board are Muslims. "Are we going to go by religion," the bench further asked.

Talking to LawStreet Bharat, Justice Dhingra said, "I am surprised with this new practice and trend started in the Supreme Court that the matter is of one thing while the observations are about something else."

He said this was exactly what had happened in Nupur Sharma case as well.

"She (Nupur Sharma) went to court for transfer but the SC judges pronounced her guilty. Same is the case here. There was no argument on validity of the Waqf Act but the SC made comments on objection raised over Muslim members of the Board," he said.

"There was no question for the petitioner to raise all these arguments before the SC on validity or presence of Muslim members in the board. To make comments on what is being discussed in media shows that judges have a predetermined views and prejudiced mind," former Justice Dhingra said.

The former judge said making oral comments had an adverse impact on the general public as well as media which also start making free comments on such observations.

"I have a suggestion to the judges that they should not watch TV or consume other media. If they continue to form their views based on media reports, then what is need for them to hear arguments," he said.

He said instead of making oral observations, the judges should put it down in writings by dictating the order.

"Why do you invite general public and media to give their comments on your oral observations? Had you given a written order, I would have gone through it and made my views whether the order has got substance or not," he said.

With regard to the Waqf Act, he said there is no other law in any religion like this, giving such wide power to the Commissioner to declare any property as Waqf property.

Judges should not watch TV or consume other media. If they continue to form their views based on media reports, then what is need for them to hear arguments: Justice Dhingra

SC judges making oral comments based on what is discussed in media shows their prejudiced view and predetermined mind: Justice S N Dhingra