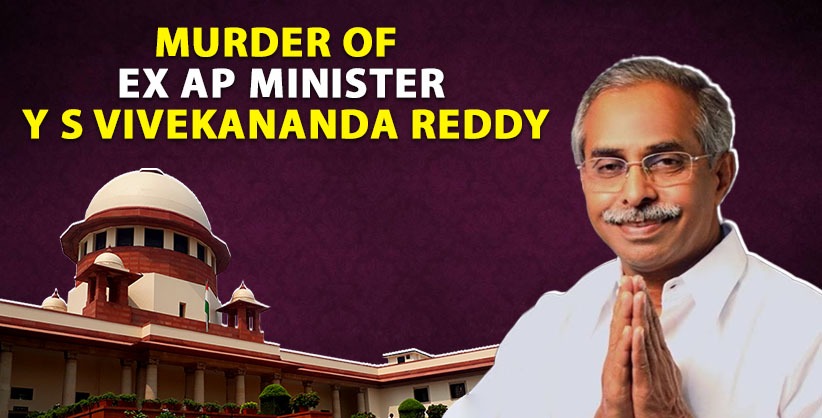 NEW DELHI: The Supreme Court on Tuesday ordered shifting the proceedings in 2019 case of murder of former Andhra Pradesh Minister Y S Vivekananda Reddy, from Kadappa to Special CBI Court Hyderabad, saying this is a fit case to transfer the trial and further investigation on larger conspiracy and destruction of evidence to the State other than the State of Andhra Pradesh.

Acting on a joint petition by Dr Suneetha Narreddy, daughter of the deceased, and her mother, a bench of Justices M R Shah and M M Sundresh noted several factors including mysterious death of a witness and lodging of criminal proceedings against CBI officers during the investigation.

"As per the settled position of law, justice is not to be done but the justice is seen to have been done also. Free and fair trial is sine qua non of Article 21 of the Constitution. If the criminal trial is not free and fair and if it is biased, judicial fairness and the criminal justice system would be at stake, shaking the confidence of the public in the system," the bench said.

The court said following the High Court's order, further investigation by the CBI on the issue of larger conspiracy of murder and destruction of evidence at the scheme of crime is still continuing.

The court also noted that even two key witnesses, namely, Shaik Dastagiri and Ranganna are already given the police protection under the Witnesses Protection Scheme, 2018, pursuant to the order passed by the trial court.

The bench also found that one of the key witnesses, namely, K Gangadhar Reddy, though initially he volunteered to give his statement under Section 164 CrPC and the CBI submitted an application to record his statement, thereafter he did not turn up to get his statement recorded and on the contrary he made a statement before the media that he was being pressurised by the CBI. Thereafter he has died under mysterious circumstances.

"Considering the facts and circumstances of the case, it cannot be said that apprehension on the part of the petitioners being daughter and wife of the deceased that there may not be a fair trial and that there may not be any independent and fair investigation with respect to further investigation on larger conspiracy and destruction of evidence at the scene of incident is imaginary and/or has no substance at all.

"Under the circumstances, we are of the opinion that this is a fit case to transfer the trial and further investigation on larger conspiracy and destruction of evidence to the State other than the State of Andhra Pradesh," the bench added.

Senior advocate Sidharth Luthra, appearing for the petitioners, said though in the chargesheet, the role of one Y S Avinash Reddy, who is a sitting Member of Parliament from the ruling party in Andhra Pradesh came to light and he was mentioned as a suspect and he played a key role in the destruction of the evidence and spreading false news that the deceased died due to heart attack, he has not yet been arrested and the State authorities and the influential people in the State are using all kinds of tactics to scuttle the investigation with the aim to shield him and his close associate D Shiv Shankar Reddy.