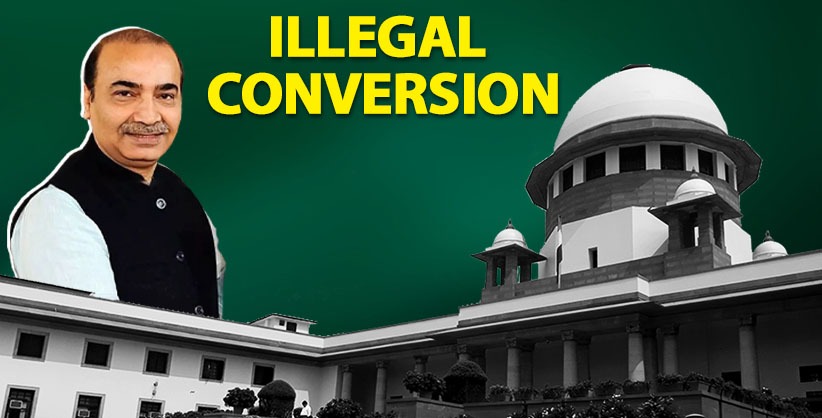 NEW DELHI: The Centre has told the Supreme Court laws to check illegal conversion were necessary to protect "cherished rights of vulnerable sections of the society including women and economically and socially backward classes".

The government also maintained that the right to freedom of religion does not include a fundamental right to convert other people to a particular religion.

Responding to a PIL by advocate Ashwini Kumar Upadhyay against large scale conversion, the Ministry of Home Affairs said it is cognisant of the gravity and the seriousness of the issue raised in the present writ petition and enactments are necessary for protecting cherished rights of vulnerable sections of the society including women and economically and socially backward classes.

“It is submitted that that public order is a state subject and in pursuance to the same various States over the course of the years passed enactments seeking to curb the practices highlighted in the present petition”, it said.

The written response said the reliefs sought in the present petition would be taken up in all seriousness by the Union of India and appropriate steps shall be taken as the central government is cognizant of the menace.

Upadhyay sought steps against religious conversion by intimidation, threat, deceit, gifts and monetary benefits, or other fraudulent means as it offends Articles 14, 21, and 25 of the Constitution. The plea claimed that if such conversions were not checked, Hindus would soon become a minority in India.

The central government said the petitioner has highlighted a large number of instances carried out in an organized, systematic and sophisticated manner of conversion of vulnerable citizens in the country through fraud, deception, coercion, allurement or other such means.

The government further said the meaning and purport of the word 'propagate' falling under Article 25 of the Constitution was discussed and debated in great detail in the constituent assembly and the inclusion of the said word was passed by the constituent assembly only after the clarification that the fundamental right under Article 25 would not include the right to convert.

The central government said the apex court has held that the word 'propagate' does not envisage the right to convert a person rather is in the nature of the positive right to spread once religion by exposition of its tenets. “This Court further held that fraudulent or induced conversion impinges upon the right to freedom of conscience of an individual apart from hampering public order and, therefore, the State was well within its power to regulate/restrict the same,” it said.

On November 14, the top court asked the Centre to clarify its stand, saying the issue of forced religious conversion is a "very serious issue", and may affect the security of the nation.