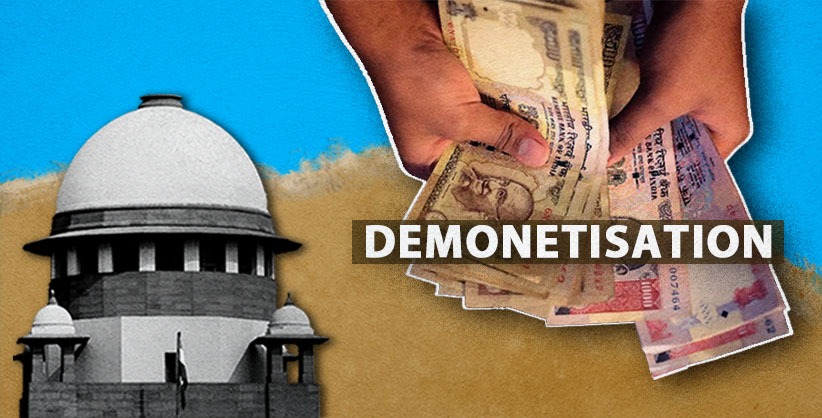 NEW DELHI: The Union government on Wednesday told the Supreme Court that November 8, 2016 order to withdraw legal tender of Rs 500 and 1,000 currency notes was one of "the critical steps in the series of transformational economic policy steps", taken after an extensive consultation with the RBI and affirmed subsequently by Parliament.

"Withdrawal of the legal tender character of the SBNs (specified banknotes) was by itself an effective measure and was also a part of a larger strategy for combating the menace of fake money, terror financing, black money and tax evasion, but not confined to them alone," it said.

"It was an economic policy decision exercised in accordance with powers conferred by an Act of the Parliament (RBI Act, 1934), in conformity with the provisions of the said Act and was subsequently affirmatively taken note of by the Parliament in the Specified Bank Notes (Cessation of Liabilities) Act, 2017," it added.

The Finance Ministry filed its written response in a batch of PILs, pending before a five-judge Constitution bench.

The government listed out a series of steps especially post 2014, including the creation of the Special Investigation Team in 2014, the Black Money and Imposition of Tax Act 2015, the Benami Transactions Act 2016, the information exchange agreements and changes in the tax treaties with select countries, the Income Disclosure Scheme, and enactment of the Fugitive Economic Offenders Act 2018.

The government claimed the number of fake currency notes and their values came down significantly, both in terms of the detection in the banks and seizures by the security agencies.

The government also maintained that all possible measures were taken to mitigate inconvenience to the public and reduce the disruption of economic activities after the decision.

Similarly, all possible steps were taken for printing, issuing and supplying the new series notes expeditiously. The short-term inconvenience and disruptions have to be seen in the larger context. The wide-ranging measures taken suggest that more-than-reasonable care was taken and attention paid to minimise and mitigate the hardship that various sections of the population faced," it said.

The government asserted post 2014, a series of steps were taken which continued even after the demonetisation, which included expansion of the formal sector and the shrinking of the informal sector.

The withdrawal of the legal tender character was one of the significant steps in the enhanced formalisation of the economy with the aim of expanding opportunities for the millions living on the periphery of the economy, it said.

According to the 2011 Census, India's total workforce was estimated at 481 million, of which an estimated 400 million were in the unorganised sector. Informal employment in India constituted a far higher share of total non-agricultural employment than most other economies.

The informal labour force was predominantly cash based. Through digitalisation, mobile and internet connectivity, opening bank accounts and ANOTAR payment of subsidies through banking and other formal channels, government policy aimed at integrating them into the formal financial system, it claimed.

"The withdrawal of legal tender character of a significant portion of total currency value was a well-considered decision. It was taken after extensive consultation with the RBI and advance preparations. The then Finance Minister had stated in the Parliament, in response to the debate on the Specified Bank Notes (Cessation of Liabilities) Bill, 2017, that Government consultation with RBI began in February 2016; however, the process of the consultation and the decision-making were kept confidential. Moreover, in this case, changes were made to the design and specifications of the new banknotes introduced for the supply of currency into the economy. The preparations, therefore, included the finalisation of new designs, development of security inks and printing plates for the new designs, change in specifications of printing machines and provision of stock with RBI branches in various parts of the country," it said.