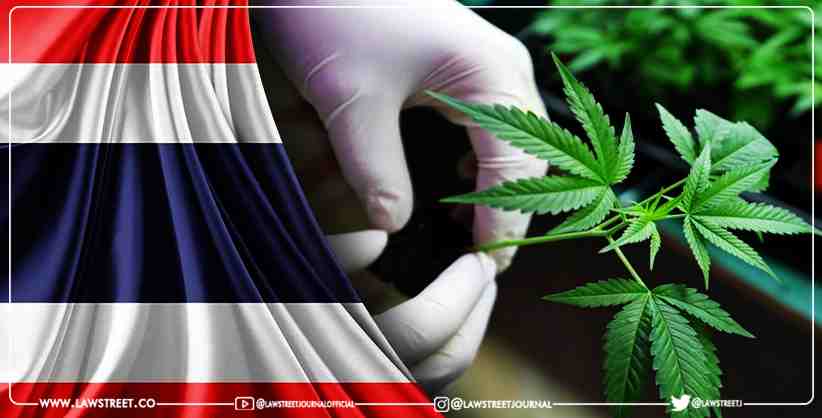 As of Thursday, Thailand made it legal to cultivate and possess marijuana, which is a dream come true for an older generation of pot smokers who remember the powerful kick of the legendary Thai Stick variety.

Thailand's public health minister's proposal to distribute 1 million marijuana seedlings starting Friday has added to the impression that the country is becoming a weed wonderland.

Thailand is the first country in Asia to decriminalise marijuana for medical and industrial purposes, thanks to the Food and Drug Administration's decision to remove the plant from the list of narcotic drugs. However, it will not follow the lead of Uruguay and Canada, which are the only two countries to have legalised recreational marijuana on a national level so far.

Apart from registering and declaring that it is for medical purposes, it appears that there would be no effort to monitor what people can produce and smoke at home.

On Thursday, several Thai advocates celebrated by purchasing marijuana from a cafe that had previously only sold goods manufactured from non-psychoactive portions of the plant. Sugarcane, Bubblegum, Purple Afghani, and UFO were among the buds available to the dozen or so people that arrived early at the Highland Cafe.

"I can say it out loud, that I am a cannabis smoker. I don't need to hide like in the past when it was branded as an illegal drug," said 24-year-old Rittipong Bachkul, the day's first customer. Marijuana is also known as cannabis or ganja in Thailand.

Rattapon Sanrak, the cafe's co-owner and a longtime legalisation activist, said that,

"As far as the government is concerned, it's their job to promote medical use only. But it is pretty clear that we have come very far and finally are legalizing its use. The government understands that it's more pros than cons."

The Thai Stick variety, which is named for the way its potent flowers are dried and tied into sticks and is the source of many strains now produced elsewhere, is well-known in the country.

The Thai government has issued a warning to people who want to light up for pleasure that smoking in public might still be considered a nuisance, with a potential 3-month jail sentence and a fine of 25,000 baht ($780). Marijuana extracts, like as oil, are still prohibited if they contain more than 0.2 percent tetrahydrocannabinol, or THC, the psychoactive chemical in marijuana.

Tourists should proceed with caution until the laws are clarified following the passage of a new cannabis law, according to Chiang Mai University's Department of Plant and Soil Sciences Professor Sarana Sommano. She said,

"There are still risks. The problem is that cannabis is no longer considered a narcotic but there are no ministry regulations and rules governing the use of it." "There is no mention of limits on use, drug-impaired driving laws. This could be a mistake by the government in trying to rush out its policy to please voters without really planning the details and explaining to the public what's going on."

Thailand is primarily interested in making a splash in the medical marijuana market. It already has a thriving medical tourism sector, and its tropical climate is perfect for cannabis cultivation. Some immediate beneficiaries of the change are people who have been locked up for breaking the old law.

"We should know how to use cannabis." "If we have the right awareness, cannabis is like gold, something valuable, and should be promoted."

"From our perspective, a major positive outcome of the legal changes is that at least 4,000 people imprisoned for offenses relating to cannabis will be released."

Her organisation is a network of civic groups worldwide advocating drug policies that incorporate human rights, health, and development.

Thailand's marijuana reforms are centred on anticipated economic gains, which are expected to increase everything from national income to small farmer livelihoods. However, there are concerns about how the advantages will be divided fairly.

One concern is that proposed laws involving complicated licencing processes and high prices for commercial use could unfairly benefit huge firms, putting small producers at a disadvantage.

According to Taopiphop Limjittrakorn, a politician from the opposition Move Forward party, the cannabis sector could wind up being controlled by a few huge companies, similar to how alcoholic beverages are controlled. His party supports the legislation that is currently being written to address the issue.

Small businesses are keen to enter the marijuana industry.

On a recent scorching Sunday afternoon in eastern Thailand's Sri Racha region, Ittisug Hanjichan, proprietor of the Goldenleaf Hemp cannabis farm, presented his fifth training course for 40 businesses, farmers, and retirees. They spent roughly $150 each to learn how to snip seed coats and care for the plants so they could produce high-quality crops.

Chanadech Sonboon, 18, was one of the attendees, and he stated that his parents used to reprimand him for trying to grow marijuana plants in secret.

He claims that his father has altered his viewpoint and now considers marijuana to be a medication rather than a recreational drug. The family runs a modest homestay and a cafe, and they hope to provide cannabis to their visitors in the future.

Rajasthan Lawyer Self Immolates Alleging Harassment by Police and SDM