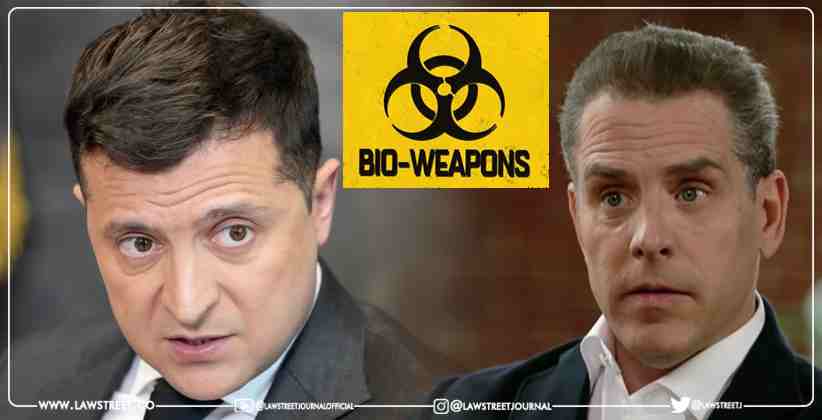 Correspondence obtained by DailyMail.com from Hunter's abandoned laptop at a Delaware repair shop in April 2019 as Joe Biden ran for president show the claims may have some truth in them. Moreover, few new emails suggest a 'scheme of interaction between US government agencies and Ukrainian biological objects' and pointed to the investment fund Rosemont Seneca, which is headed by Hunter Biden. These emails show Hunter was also particularly involved in Metabiota's operations in Ukraine.

According to Intelligence experts, the Russian allegations are nothing but a propaganda to divert the attention from the usual course of facts. These are attempts to justify President Vladimir Putin's invasion of Ukraine and sow discord in the US, the suggested.

However few new emails from Hunter's abandoned laptop show he helped secure millions of dollars of funding for Metabiota, a Department of Defense contractor specializing in research on pandemic-causing diseases that could be used as bioweapons.  He also introduced Metabiota to an allegedly corrupt Ukrainian gas firm, Burisma, for a 'science project' involving high biosecurity level labs in Ukraine. Ironically the Vice President of Metabiota in one of his emails to Hunter Biden had expressed a concern which seemed very unlikely for a biotech firm. The email had been describing how they could 'assert Ukraine's cultural and economic independence from Russia'.

Emails and defense contract data reviewed by DailyMail.com suggest that Hunter had a significant role in making sure Metabiota was able to conduct its pathogen research just a few hundred miles from the border with Russia. Hunter and his colleagues at his investment firm Rosemont Seneca Technology Partners (RSTP) routinely raised millions of dollars for technology companies, hoping the firms would take off and make them all fortunes. Metabiota was one of those firms. The president's son and his colleagues invested $500,000 in Metabiota through

Emails between Hunter and his colleagues excitedly discuss how the company's monitoring of medical data could become an essential tool for governments and companies looking to spot outbreaks of infectious diseases.

That month, Metabiota vice president Mary Guttieri wrote a memo to Hunter outlining how they could 'assert Ukraine's cultural and economic independence from Russia'. “Thanks so much for taking time out of your intense schedule to meet with Kathy [Dimeo, Metabiota executive] and I on Tuesday.  We very much enjoyed our discussion, as promised, I've prepared the attached memo, which provides an overview of Metabiota, our engagement in Ukraine, and how we can potentially leverage our team, networks, and concepts to assert Ukraine's cultural and economic independence from Russia and continued integration into Western society.”

Former senior CIA officer Sam Faddis, upon reviewing those mails said “It raises the question, what is the real purpose of this venture? It's very odd,” he said

[Breaking] UPSC Extra Attempt For Students Seeking Another Chance To Appear For Mains Exam Due To Covid Not Possible: Centre

There Are 25+ US Funded Biolabs In Ukraine, Which If Breached, Would Release Deadly Pathogens To The World; Urgent Action Needed To Prevent Disaster: Tulsi Gabbard