Explained: Roe v. Wade and Right to Abortion In U.S. 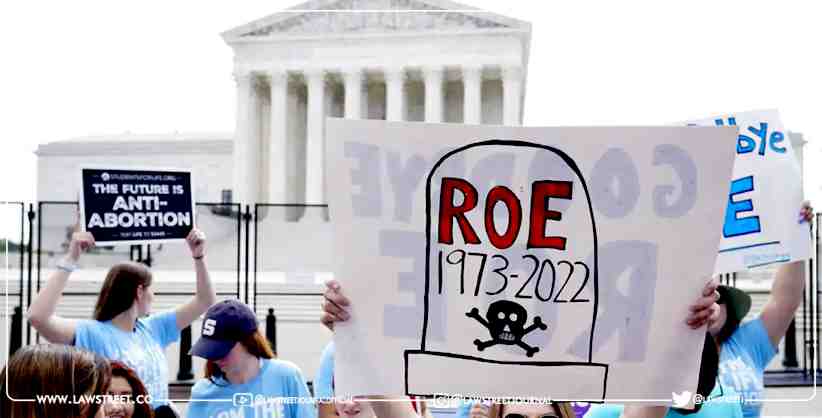 On Friday (June 24), the United States Supreme Court overturned by a 6:3 majority "Roe v. Wade," the court's landmark 1973 judgement that made abortion a constitutional right.

The verdict, an early draft of which "Politico" scooped on May 3, will transform how women live in America. Near-total bans on abortion will come into effect in about half of the country’s states.

According to 'The New York Times', the Missouri attorney general quickly issued an opinion activating the state's "trigger" law, effectively banning abortion except in cases of medical emergency, following the Supreme Court's ruling on Friday. Several other states have also planned to implement trigger laws.

The overturn of "Roe" leaves abortion laws totally up to the states because there is no federal law safeguarding the right to an abortion in the US. Conservative states will likely bring back restrictive laws that prohibited abortions before the Supreme Court set the foetal viability standard in 1973.

According to a previous prediction by The New York Times, legislatures in 22 states would "almost certainly" take action to ban or severely restrict access to abortion, with poorer women typically bearing the brunt of these actions. The NYT report said that without the protection of ‘Roe’, the number of legal abortions in the US could fall by at least 14%, quoting research based on the effects of the closures of abortion clinics in Texas between 2013 and 2016.

According to activists and progressive politicians, the availability of clinics and insurance payouts are important issues that are a part of many women's struggles even with the support of "Roe." Access can be considerably more difficult without this legal support.

The 22-year-old plaintiff, Norma McCorvey, is referred to in the case as just "Roe". Wade was the defendant and the district attorney for Dallas County (Texas) at the time.

In "Roe," abortion was legalised up until the point of foetal viability, or the point at which a foetus may survive outside the womb, overturning laws that had made it illegal in multiple states.

At the time of the "Roe" decision, nearly 50 years ago, foetal viability was approximately 28 weeks (7 months); experts now concur that medical advancements have lowered the threshold to 23 or 24 weeks (6 months or slightly less), and more recent studies suggest that this may even be as low as 22 weeks. About 40 weeks are usually required for a pregnancy.

The point at which the rights of the woman and the unborn fetus can be separated is frequently referred to as "foetal viability." Commonly, the beginning of a person's most recent menstrual period is used to determine how long a pregnancy is. Pre-viability timeframes give women extremely little time and chance to decide whether to abort because many people don't realise they're pregnant until the sixth week.

This metric is used in abortion laws all throughout the globe, although opponents of abortion claim that it was chosen randomly by lawmakers and the court in the "Roe" case.

Details of the ruling were not immediately available. But according to a draft opinion obtained by "Politico," the opinion's author, Justice Samuel Alito, rejected "Roe" as "egregiously wrong from the start" and declared that "Roe" and "Casey," a 1992 landmark abortion ruling by the court that reaffirmed "Roe's" main tenet that women have the right to terminate pregnancies up to the point of foetal viability

The "Mississippi case," also known as "Thomas E. Dobbs, State Health Officer of the Mississippi Department of Health v. Jackson Women's Health Organization," was the subject of Justice Alito's majority opinion, which had received the support of four other conservative justices:

The majority view quoted by Politico held that,

“It is time to heed the Constitution and return the issue of abortion to the people’s elected representatives.”

The draft judgement stated that,

‘Roe’s “survey of history ranged from the constitutionally irrelevant to the plainly incorrect,” its reasoning was “exceptionally weak,” and the decision has had “damaging consequences”.

“The inescapable conclusion is that a right to abortion is not deeply rooted in the Nation’s history and traditions.”

With a direct challenge to the 1973 ruling, Mississippi's Republican-majority legislature banned the majority of abortions after 15 weeks in 2018, which is significantly earlier than the 15-week mark at which the foetus becomes viable.

Jackson Women's Health Organisation, the state's last remaining abortion facility at the time that offered procedures up to 16 weeks of pregnancy, challenged the law, and in November of that same year, US District Judge Carlton Reeves overturned it, finding that it "unequivocally" violated the constitutional rights of women.

The so-called "heartbeat" abortion law, an even stricter regulation that bans most abortions once foetal cardiac activity can be detected, which is around six weeks, was signed by then-Republican Governor Phil Bryant on March 19, 2019. According to a report at the time by The Associated Press, Bryant urged the law's opponents to file a lawsuit: "We will have to fight that fight if they do not believe in the sanctity of life, those who are in organisations like Planned Parenthood. But it's worth it."

As per the heartbeat law, medical licences might be suspended for doctors who carried out abortions once a foetal heartbeat was discovered. Pregnancies brought on by rape or incest were not exempted from the law.

A district court also struck down this rule, and the 5th Circuit Court of Appeals in New Orleans upheld the ruling in February 2020. The restriction on the other law from 2018 was likewise maintained by the Circuit in December 2019.

The hearings in December 2021 gave hints that the Supreme Court would likely uphold the 2018 statute, which banned abortion if "the probable gestational age of the unborn human" was found to be more than 15 weeks, barring only medical situations or "a severe fetal abnormality."

Then, a decision on the issue was anticipated for June or July 2022. Finally, it arrived on June 24.

Conservatives and liberals in the US have been sharply divided on the subject of abortion for decades.

A challenge to "Roe v. Wade" would have been unlikely to be successful until a few years ago, but the changes in the Supreme Court's makeup brought about by the election of conservative Justices Gorsuch, Kavanaugh, and Barrett during the administration of Donald Trump sparked a new wave of legal action on the subject.

The Supreme Court's resoundingly conservative majority provided the conservatives with their finest opportunity to overturn "Roe" in decades.

According to a previous article in "lThe NYT, depending on how the court worded its final judgment, the overturning of ‘Roe’ could mean that legal abortion access would “effectively end for those living in much of the American South and Midwest, especially those who are poor.

The overturning of "Roe" has been prophesied to cause "seismic" changes in American society by liberal observers. As a victory for conservative right-wing ideology, it will be an important decision with global repercussions.

After the US Supreme Court struck down the universal right to abortion, politicians and celebrities took to Twitter to share their reaction to this ruling.

"Today is a very solemn moment for the United States. The Supreme Court expressly took away a Constitutional right from the American people that it had already recognized. They simply took it away. That's never been done to a right that is so important to so many Americans."

"Today, the Supreme Court not only reversed nearly 50 years of precedent, it relegated the most intensely personal decision someone can make to the whims of politicians and ideologues—attacking the essential freedoms of millions of Americans."

"Most Americans believe the decision to have a child is one of the most sacred decisions there is, and that such decisions should remain between patients and their doctors. Today’s Supreme Court opinion will live in infamy as a step backward for women's rights and human rights."

"Watching a Constitutional right be stripped away is horrific. A woman should have the right to CHOOSE what she wants to do with her own body. End of story."

Position on Abortion in India -

Abortion is legal in India up until 20 weeks of pregnancy under the Medical Termination of Pregnancy Act, 1971. The limit on abortions was increased to 24 weeks through a 2021 amendment, but only for specific groups of pregnant women, such as rape or incest survivors, and even then, only with the consent of two licenced doctors.

There is no time restriction for abortion in cases of foetal disability, although this is permitted by a medical board made up of specialised doctors that was established by the governments of the states and union territories.

Throughout 16 countries around the globe have outright bans or even criminal laws against abortion. However, a number of countries with a Catholic majority, including Ireland and Mexico, have decriminalised abortion in the past ten years.

Benazeer Heena: Who will take responsibility for her unilateral divorce through Talaq-e-Hasan ?