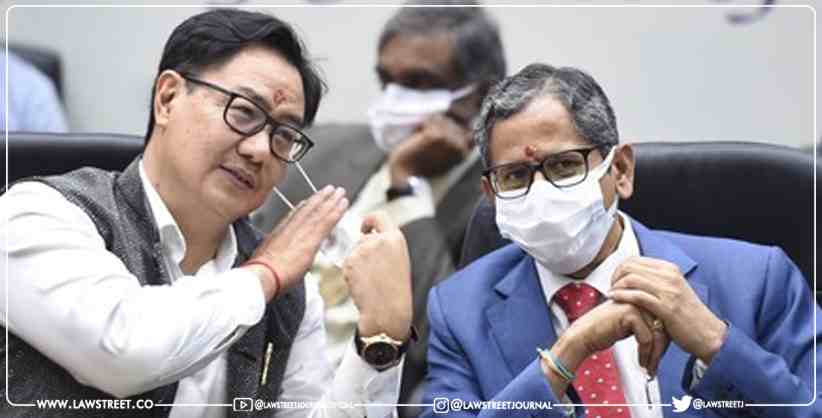 While addressing a conference on ‘Arbitrating Indo-UK Commercial Disputes’ CJI Ramana said that India needs a robust arbitration ecosystem to get an investor friendly tag.

"India is said to be one of the fastest growing economies. In trade and business, as in any human relationship, differences of opinions and conflicts are bound to occur. To achieve the title of an investor friendly destination, India needed to establish and strengthen an efficacious mechanism to address these issues and ensure that business continues to operate without much hassle. This is where alternate dispute resolution, and particularly arbitration plays a significant role," said CJI.

Union Minister of Law and Justice, Kiren Rijiju, said, "To keep pace with current developments in the arbitration space and to enable arbitration as a viable dispute resolution mechanism, the Indian arbitration law has undergone significant amendments in the years 2015, 2019 and 2021. "

He said the government is soon going to establish a world-class arbitration institute in New Delhi.

Citing the case of the Amazon-Future dispute, the law minister said, "Indian courts have on several occasions highlighted the importance of ADR and their pro-arbitration stand. The Indian judiciary is playing a pivotal role in promoting ADR mechanisms, particularly arbitration and mediation.”

Stressing the importance of arbitration, the CJI said, "Arbitration is the best-suited dispute resolution mechanism for the commercial world. It is an effective alternative to traditional litigation and is regulated primarily by the terms previously agreed upon by the parties themselves. The process is consensual and confidential and the result is binding. The parties have the freedom to choose not only the procedure and the laws that govern their transaction, but also have the freedom to choose their own arbitrators and domain experts."

The CJI said although arbitration is not new to India, but it is still a domain which is evolving with the changing needs of the time. Legal regime was introduced first in 1940, by way of a pan-India Arbitration Act. Keeping in view the increasing cross border transactions and disputes arising thereof, India adopted the UNCITRAL Model Law while enacting the Arbitration and Conciliation Act in 1996.

One of the important pursuits of the drafters was to achieve a cost-effective and quick mechanism for the settlement of disputes with minimum intervention of Courts in the process of arbitration, he added.

CJI Ramana said that an issue that has been affecting court systems across the world relates to the fact that decisions within the regular courts take a long time. There is no denying that pendency of cases is a major issue in India. Reasons for this include growth of the Indian economy, population and rising awareness about rights. In the absence of infrastructure and sufficient number of judges commensurate with the increasing work load, the problem is intensifying.

He stressed on transforming and upgrading the judicial infrastructure in India, as well as filling up of judicial vacancies and augmenting the strength.

‘After I assumed the office of Chief Justice of India, in addition to filling up of 11 vacancies in the Supreme Court, the Collegium could secure appointment of 163 Judges to various High Courts. 23 more recommendations are pending with the Government. The Central Government is yet to transmit another 120 names received from various High Courts to the Supreme Court Collegium. I have been reminding the Government to expedite the process so that remaining 381 vacancies can be reduced considerably. I am hoping for some forward movement in this regard,’ said the CJI.

He said another way of reducing the burden of pendency is to promote and popularise other means of dispute resolution, such as Arbitration or Mediation.

‘In fact, throughout my professional legal career, I have been a strong advocate of dispute settlement mechanisms that do not require litigants to face traditional litigation. Several international dispute resolution institutions are being established across India, to provide the commercial world speedy and effective resolution of their disputes,’ added Justice Ramana.

The CJI said, ‘Ultimately, the presence of modern infrastructure, with a global outlook, will attract both domestic and foreign parties to seek resolution of their disputes. The increasing emphasis on establishing modern Institutional Arbitration Centers is understandable considering the benefits of institutional arbitration. The pre-established rules and framework give parties much needed certainty and transparency. An obvious advantage of institutional arbitration is the assured efficient administration’.