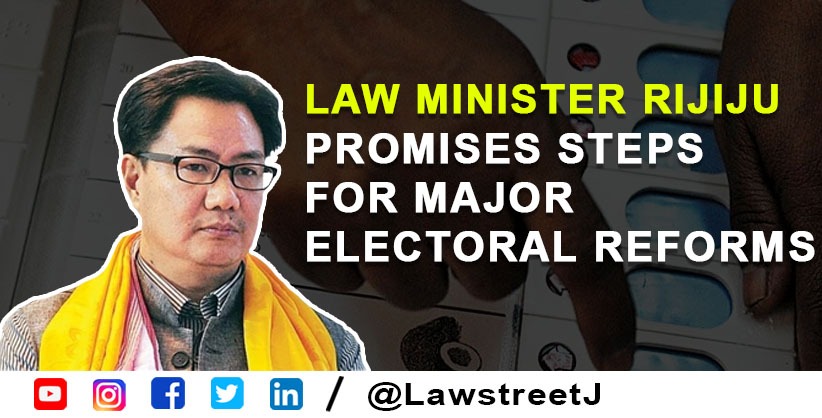 NEW DELHI: The Union government will take steps after due consultation for major electoral reforms required as per the new changing time and situation, Law Minister Kiren Rijiju has said on Thursday.

This comes after the Election Commission noted that the declarations provided by the political parties about the financial ramifications of poll promises are quite routine and ambiguous. The poll panel proposed to mandate the political parties to provide authentic information to the voters to assess the financial viability of their election promises.

“The Centre will take steps after due consultation for major electoral reforms which are required as per the new changing time and situation,” said a tweet from the
Law minister’s office in connection with electoral reforms.

The poll panel has proposed to supplement the existing Model Code of Conduct (MCC) guidelines and mandate political parties to inform voters about financial ramifications of their promises in the manifesto against well-defined quantifiable parameters.

The existing guidelines under the MCC require the political parties and candidates to explain the rationale for promises made therein as well as the possible ways and means to finance such promises. According to the poll panel, the declarations are quite routine, ambiguous and do not provide adequate information to the voters to exercise informed choice in an election.

In a meeting led by CEC Rajiv Kumar and attended by Election Commissioner Anup Chandra Pandey, the EC decided that it cannot remain a mute spectator and overlook the undesirable impact of some of the promises and offers, on the conduct of free and fair elections and maintaining level playing field for all political parties and candidates.

During the hearing in a PIL by BJP leader and advocate Ashwini Kumar Upadhyay against the freebies, the EC had told the Supreme Court that being a constitutional body, it should be kept away from the panel of experts – representing a wide spectrum of governmental and non-governmental bodies -- proposed to deliberate on the issues with the validity of freebies announced by the political parties to induce voters during polls.

The court had then orally expressed its discontent with EC for not taking stand on the menace of freebies offered by political parties.

In an affidavit, the EC had said: "It may not be appropriate for the commission being the constitutional authority, to offer to be part of the expert committee especially if there are ministries or government bodies in the expert body”.

"There are continuous elections in the country and any opinion/view/comment during deliberations in a multi-member body might, in the event of being publicised, amount to pre-decide the issue and disturb the level playing field," the EC had said.

The EC had further said that it will be greatly benefitted by the recommendations of the expert body, which the top court may deem appropriate to set up and also committed to give highest consideration to the same, while strengthening/ modifying its existing guidelines in the interest of purity of electoral process.