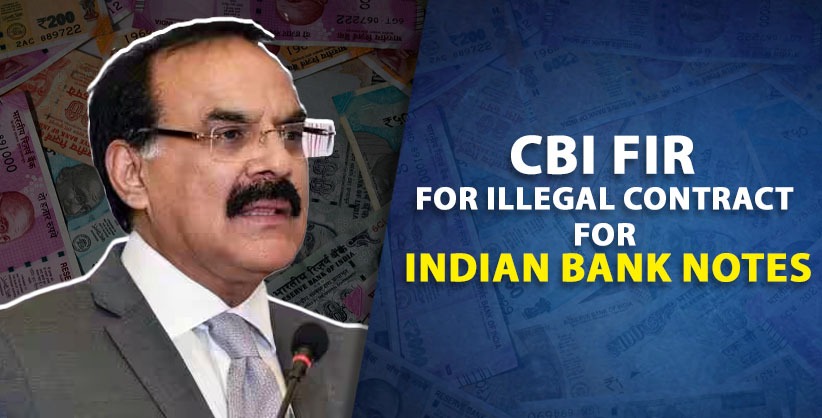 NEW DELHI: In a trouble for former Finance Secretary Arvind Mayaram, the CBI has registered a case, alleging him of granting a contract to a UK-based company "illegally" for supplying exclusive colour shift security thread for Indian bank notes.

He is alleged to have granted a three year extension to an "expired contract" with the company without taking mandatory security clearance from the Ministry of Home or informing the then Finance Minister.

On Thursday, the CBI had conducted searches at the premises of Mayaram in Delhi and Jaipur, two days after it registered a case against the former IAS officer and unidentified officials in the Ministry of Finance, RBI and the UK company De La Rue International Ltd.

According to the CBI FIR, registered under sections of Indian Penal Code, including criminal conspiracy and cheating, and provisions of the Prevention of Corruption Act, the extension granted by Mayaram was fourth since 2004 but when he extended it in June 2013, the agreement had already lapsed six months earlier.

The five-year agreement of the Union government with the UK company entered on September 4, 2004, was extended four times till December 31, 2015.

The company had mentioned in the agreement that it had developed an exclusive India specific green to blue colour shift clear text MRT machine readable security thread for use in Indian banknote paper as a security feature and for which the company holds exclusive manufacturing rights.

However, the FIR claimed, it came to light that the company had filed for a patent in India on June 28, 2004, which was granted on June 27, 2011. This showed that the company did not have a valid patent as claimed when the agreement was signed.

"Enquiry has further revealed that De La Rue made false claims of holding patent and they did not have any patent for their colour shift thread at the time of presentation in 2002 and their selection in 2004," the FIR said.

It also pointed out that RBI Executive Director P K Biswas had signed the exclusivity agreement without verifying the patent claim.

The FIR also said the RBI on April 17, 2006 and the Security Printing and Minting Corporation of India Ltd (SPMCIL) on September 20, 2007 had submitted their reports citing that the company did not have a patent.

Despite non-possession of the patent, the FIR said, the contract agreement was extended from time to time till December 31, 2012.

"Enquiry further revealed that on May 10, 2013, the matter was brought to the notice of Arvind Mayaram, as Secretary, Economic Affairs, that the contract agreement with De La Rue had expired on December 31, 2012; therefore, extension cannot be granted legally," the FIR alleged.

Mayaram, as per the FIR, did not apprise the Finance Minister about this and even without his approval, as was the case in three previous occasions when extension was given, the IAS officer cleared the extension for three years on June 23, 2013.

The CBI claimed enquiry has also revealed that Anil Raghbeer, signatory of Contract Agreement from De La Rue, has received Rs. 8.2 crore from offshore entities apart from the remuneration paid by De La Rue in 2011.