Home Executive Don't want to be remembered for handing over the national capital to complete anarchy, Centre tells SC
Executive

Don't want to be remembered for handing over the national capital to complete anarchy, Centre tells SC 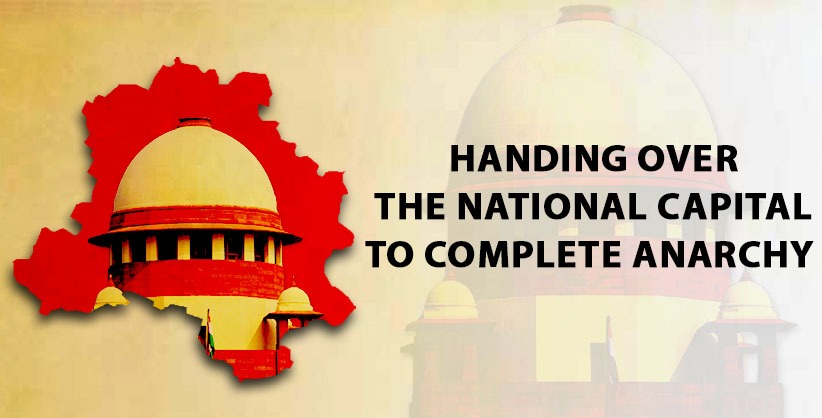 NEW DELHI: The Centre on Wednesday asked the Supreme Court to refer its dispute with Delhi on control of services to a larger bench, saying it does not want to be remembered in history for "handing over the national capital to complete anarchy".

As Mehta said, "I have filed an application for reference", the CJI replied, "We did not hear arguments on reference. It was never argued, now we are in rejoinder".

Mehta, for his part, asserted that reference is needed as they did not want to be remembered in history for handling over capital to complete anarchy.

On this, the bench, also comprising justices M R Shah, Krishna Murari, Hima Kohli, and P S Narasimha, said reference to a larger bench had to be argued at the outset, while the hearing in the case was nearing the end.

The court, however, reserved the judgment after hearing Mehta and senior advocate A M Singhvi, representing the Delhi government, for almost four-and-half days.

Mehta, for his part, contended that when he filed the application seeking reference to the larger bench, Delhi government opposed it and the court told him that it can be argued during submissions.

"Reference is essentially on the ground that contours of federalism between Union and Union Territory require relook. It is covered in my arguments," Mehta said.

In its application, the Centre had sought reference to a larger bench of nine or more judges in the Delhi-Centre dispute over control of services.

Chief Justice Chandrachud said, "We would have looked at the matter differently, reference was never argued".

Mehta submitted before the bench to allow him to submit the application.

The bench replied, "we will consider."

The matter before the court related to administrative control over transfers and postings of civil servants.

The Centre said that it sought reference of appeal to a larger bench for a “holistic interpretation” of Article 239AA of the Constitution, which was core to the determination of issues involved.

In July 2018, a constitution bench had held that the executive power of the Union government in National Capital Territory of Delhi was confined to land, police and public order under subsection 3 of Article 239AA.

Any outfit for Islamic rule in India cannot be permitted to exist, MHA to SC, while defending ban on SIMI [Read Affidavit]