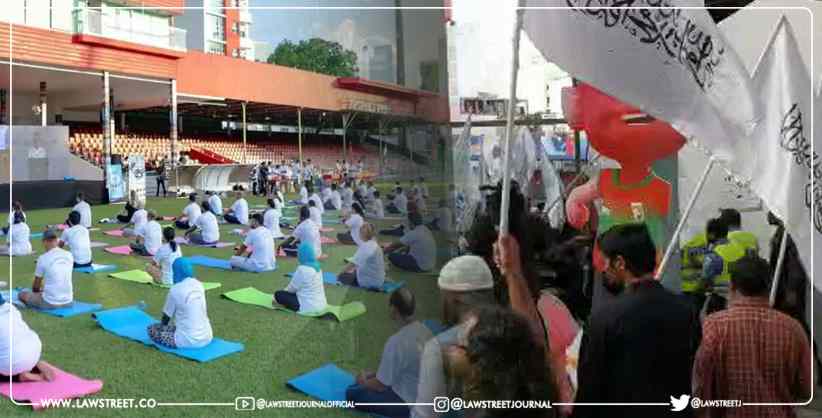 On Tuesday, an angry Muslim mob stormed the Maldives national football stadium and attacked participants at the "International Yoga Day" event organised by the Indian High Commission and the Maldivian Government.

The mob stormed the Galolhu Stadium, where more than 150 people, including diplomats and government officers, were taking part in an event organised by the Indian High Commission. The Maldives' President has ordered an immediate probe into the incident. Six people have been arrested.

The country’s police force soon arrived and tackled the mob, allowing the event to resume.

Maldivian President Ibrahim Mohamed Solih termed it a matter of “serious concern”.  Soon after the incident, he tweeted:

“An investigation has been launched by @PoliceMv into the incident that happened this morning at Galolhu stadium. This is being treated as a matter of serious concern and those responsible will be swiftly brought before the law.”

The Government of Maldives “strongly condemned” the incident. In a statement the Indian Ocean island nation’s Ministry of Foreign Affairs said that,

“Such malicious acts of violence aimed at disrupting public safety and undermining security of individuals and the diplomatic corps will not be tolerated.”

The incident was caught on camera by Maldivian media, which showed irate males charging at participants who were seated on the ground on yoga mats while brandishing poles and flags. The opposition Progressive Party of the Maldives, led by former president Abdulla Yameen, who is now leading an "India Out" campaign, was the target of the assailants' use of objects, according to the Maldives Police Service. The police said that,

“As of now, the evidence indicates that the demonstrators were using items taken from the office of the Progressive Party of the Maldives (PPM).”

After taking six men into custody in connection with the incident, the police said that,

"The perpetrators had sought to incite fear by forcefully entering, destroying property, and attempting to assault participants of the event."

Protesters displayed placards stating that yoga violated Islam's beliefs before the event. According to a report from the Maldivian news agency, The Edition, some Islamists think that doing yoga is equivalent to worshipping the Sun, which is considered heretical in Islamic belief.

The protesters allegedly demanded that the Yoga Day celebrations be cancelled and that everyone leave the stadium right away. They were holding banners and placards and shouting slogans. According to reports, some of the participants said that the mob had threatened them.

Who is Draupadi Murmu? First Tribal Lady who can become next President of India.