Donation Boxes For Pakistan Based Dawat-e-Islam Found In 250 Shops In U.P, Links To Udaipur Murder Established 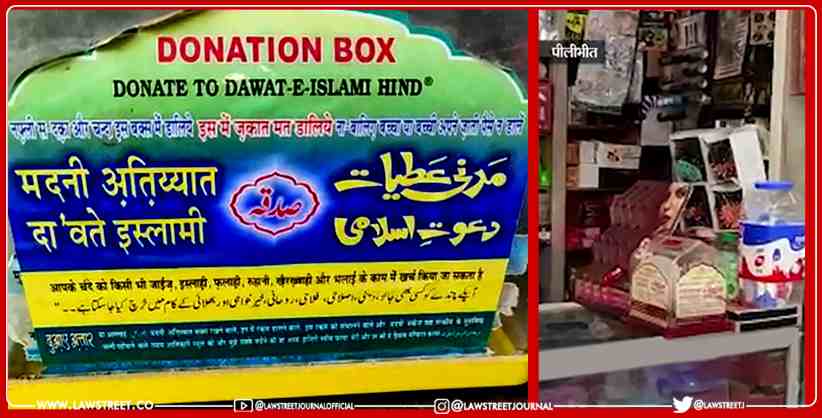 Along with running many madrasas in India, it is allegedly collecting donations by keeping piggy banks found at more than 250 shops in Kanpur itself.

After the name of the organization came in the headlines, the police of the district has also become active. This organization has come into the limelight after the murder of Kanhaiyalal, who supported Nupur Sharma in Udaipur.

In the SIT investigation, it has come to the fore that the killer Ghaus Mohammad has also gone to Pakistan. He went to Pakistan and attended a procession of Dawat-e-Islami. The reality seen on the ground, how Dawat-e-Islami is spreading its legs in Pilibhit, was informed by Maulana Zaratab Khan of Shahar Qazi and Astan-e-Alia Mushahidya.

As per reports, media reporters saw Dawat-e-Islami's piggy banks kept at the shops.

Dawat-e-Islami's piggy bank is kept at almost every other shop in the area like Belo Crossroads, Ramswaroop Park, Bareilly Darwaza, Jehanabad, Sherpur, Neuriya. The number of such shops is close to 250, states Dainik Bhaskar reporters.

Who kept the piggy bank, no one knows where the money goes, it is written on the piggy bank that you can donate in it as per your wish. Along with ten, twenty or fifty notes, retail rupees will also be seen in the piggy bank. However, the shopkeepers do not know who takes the money.

Rizwan, who runs a cosmetic shop, says, "The piggy bank of Dawat-e-Islami was kept at the behest of a local friend. People put money as they come and go. We don't insist on anyone." “This money is for the poor, for the education of poor children, for all the people who need help,” says shopkeeper Sanu.

However, most of the shopkeepers in the market could not tell where this money goes, who takes it. Where is the head office of Dawat-e-Islami? Even after talking to 30 shops, no one could answer these questions properly.

The organisation, with its headquarters in Pakistan's Karachi, has been under the spotlight after it emerged that one of the two men who carried out a deadly attack in Rajasthan’s Udaipur had attended a Dawat-e-Islami event in 2014.

UP Man Arrested For Selling Meat Only In Newspapers That Have Hindu Gods Images, Later Attacks Police With Knife