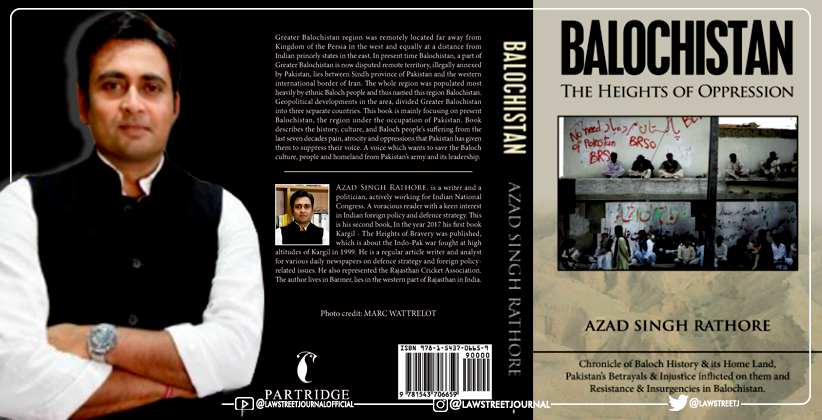 Partridge India has published the latest book by Indian Writer and Politician Azad Singh Rathore on Balochistan, a territory under the control of Pakistan. The book titled “Balochistan: The Heights of Oppression” discusses the history and homeland of the Baloch people, along with the betrayals and injustices inflicted on them by Pakistan and the insurgent movements in the region.

Balochistan is named after the Baloch people, who constitute the dominant ethnic group in the region. The region was formed into a political entity in the 12th Century AD after the formation of the Baloch Confederacy. Historically, the region had remained independent from the Kingdom of Persia to the west and the princely states of India, as Greater Balochistan. Geopolitical development in the region has divided Greater Balochistan, and today it is divided between three countries. Pakistan and Iran are in dispute over control of the Balochistan territory since 1947.

The resource-rich region of Balochistan, having significant reserves of natural gas, has been serving as the economic powerhouse of Pakistan for several decades but remains underdeveloped. The region lacks basic amenities and forms one of the remotest parts of Pakistan. There have also been several reports of human rights violations, including the murder of Baloch people at the hands of the Pakistani Military.

The book gains significance considering the fact that the plight of the Baloch people has not received much political or academic attention. The region is out of bounds for foreign journalists and academicians. The book also stands out for its depth and quality of research on the region.

Rathore, through his work, has explored the history, economy and socio-political issues of the people of Balochistan. He discusses the suffering and oppression that the people of present-day Balochistan have suffered from Pakistan.

Commenting on his inspiration to write the book, Rathore said that:

“As citizen of biggest democracy in world, India, We, everyone, learned from our constitution that we should take a stand against everything which is unconstitutional, unethical, in justice full and unequal. As a political activist, I try my best to raise voice against injustice and unconstitutional issues matters happening around. As citizen of the India, country whom I love more than anything, I felt it is my duty to raise my voice until justice served to the last man standing in the queue. In same compassion, I firmly believe that, as a responsible citizen of this beautiful world, I must speak and take a stand for the any deprived soul on this earth. Through this book, I am making an effort to express my sensitivity towards Baloch people, who are around 350 kms away only from my hometown, living in traumatic conditions under suppression and oppressions of our neighbouring country Pakistan.”

The 306 pages book is available on e-commerce platforms like Amazon and Barnes & Noble as hardcopy and paperback. An e-book version of the book is also available for purchase.