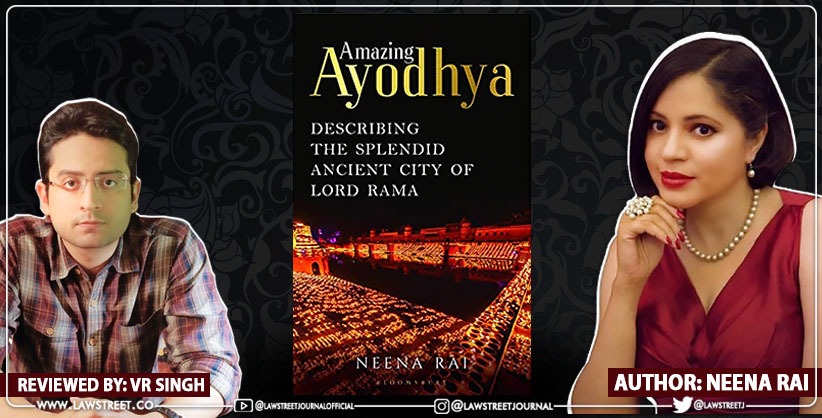 The legacy of Ayodhya is much older than Lord Rama. It was the capital of the Iskhvaku dynasty, founded by Manu himself. The first man and the original ancestor of our current times. Later political perversions have distorted ancient Indian history in an attempt to diminish itihasa as fictional hogwash during the Mughal era and later by the British and post-colonial historians as 'mythology'. It didn't succeed. No son of the soil can ever let go of his true identity. Regardless of how much even the present politician will convince you to remain a hostage of the past.

The birthplace of Lord Rama was, coincidentally, also the subject of my short Book on the political turmoil surrounding the Janmabhoomi. Not much is widely known beyond the tumultuous political history. For instance, many are unaware that the birthplace of Lord Rama also witnessed his death. The God-King ended his Avatar by walking into the Sarayu River. In the dust of the current political dispute, we seem to have overlooked the magical history of the ancient city of Ayodhya.

No doubt, Lord Rama was the most famous King of Ayodhya. His father, Dashratha, famous for his clairaudient abilities, reigned over the Kosala Kingdom, as did the later descendants of the Sun who came after them. This much is well known and discussed even today. However, how much is known about the ancient cities, culture, architecture, weapons, and animals? Did you know that there were artillery guns and possibly even missile defence systems and technologies that would challenge the laws of modern physics during the time of the Kosala Kingdom? Or the fact that the battalions were divided based on a calculated ratio depending on their strike and defence capabilities? Moreover, did you know that Valmiki's Sanskrit text even describes the presence of the Hippopotamus? Archaeologists have now found evidence of this near the river Narmada.

Much of this rich knowledge has remained locked within the Sanskrit texts of the Valmiki Ramayana, awaiting professional translation. It is a tragedy of our times that the politics of change and dispute have equated an interest in ancient scriptures with being regressive and communal. Politics and religion are inseparable, and political power has been known to be the guarantor of social change. Buddhism owes its spread to the Imperial might of Emperor Asoka. Both Lord Rama and Krishna spread righteousness through their royal crown. However, the role of royalty in India was swept under the rug post the Independence movement. The motives may have been genuine - introducing democracy into an undemocratic society. But the critical mistake was to equate Sanatan dharma with the Abrahamic religions and mimic the separation of the church from the State. It was never going to happen; we are not the same. It has resulted in the present-day pandemic of educated and decorated idiots. A generation where one side considers religious scriptures to be regressive and another side that prefers to abrahamize Sanatan Dharma to replicate the spread of Abrahamic religions across the world. The joke goes further; both sides will convince you that the other is the enemy of truth.

It is unfortunate that there is no ringside view of Ancient Indian history or Itihasa. Most knowledge was passed down or 'downloaded' in modern spiritual lingo using psychic abilities, like the Valmiki Ramayana. They are exclusively in Sanskrit, a language in which we lack fluency. The mere mention of psychic abilities or Sanatan Dharma today gets you stereotyped within seconds. Where does the authentic seeker of knowledge find himself in such an atmosphere? Genuine questions remain unanswered. In an atmosphere of post-truth, how does an author or researcher translate Sanskrit texts and unlock ancient wisdom? It would require tremendous courage and conviction.

Amazing Ayodhya, translated directly from the scriptures by Neena Rai, is a pleasant surprise. It is remarkably well researched, structured and a fair account of the contours design, military and culture of the ancient Kingdom and its capital. Writing about the design, layout and location of Ayodhya would, first and foremost, require a working knowledge of Sanskrit to translate and then a further advanced knowledge of Vastu, Shilpa and Jyotish (astrology) Shastras. Furthermore, to present such vast knowledge in an English language version that is idiot-proof is a separate matter. The Book itself requires multiple readthroughs as we come to the glorious realization that the author has succeeded in this arduous task.

Amazing Ayodhya carries all the strengths of well-researched English language accounts related to Itihasa and none of their weaknesses. It mentions every reference utilized and is a delight for the healthy sceptic reader. Split into six parts, the shlokas translated by the author tell us, among other things, about ancient weapon systems that would baffle military historians and scientists today.

I was particularly fascinated by the Vimana architecture of the buildings and how proportionately laid out and beautifully planned the ancient capitals were at the time. To protect both from the elements and foreign invasion. There is even a comparison of such ancient architectural techniques discovered at Dholavira, the Harappan city. From a research perspective, I would give the Book resounding applause. It is a fascinating account of the ancient past that authors with a spine are attempting to resurrect today. A missing Hindi version remains its weakness, for such works deserve a broad audience.

I firmly conclude that the Book delivers for those genuinely interested in ancient history, outside of propaganda. The information age is, thankfully, bringing an end to the age of distortion. The Renaissance of Hindu Scriptures, first and foremost, requires transparency and then accuracy. It is an accepted tenet that the act of bringing truth into an atmosphere of deception is revolutionary. I do believe that the role of technology has enabled the existence of such great works. There is no question that Amazing Ayodhya will be recorded in history as a pioneer in the resurgence of Sanatan Dharma.

V R Singh is an Indian author and Director of 888+, an Executive Protection Company.